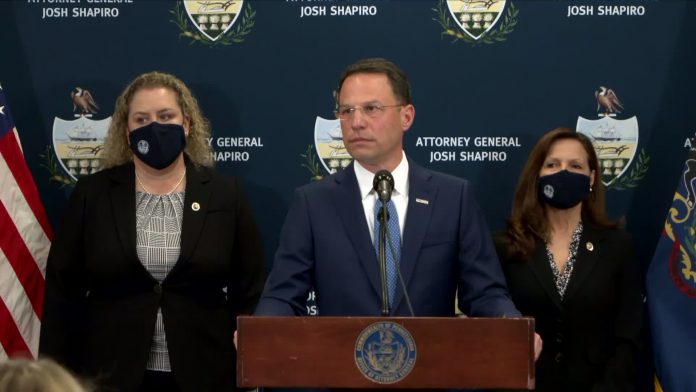 Attorney General Josh Shapiro announced that Glenn O. Hawbaker Inc. of State College has been charged with four counts of theft relating to violations of the Pennsylvania Prevailing Wage Act and the federal Davis-Bacon Act. Hawbaker is one of the largest contractors to complete projects on behalf of the Commonwealth, receiving an estimated $1.7 billion in funding as of 2021.

“This is the largest prevailing wage criminal case on record – under Pennsylvania prevailing wage law and across the United States under federal law,” said AG Shapiro. “My focus now is on holding Hawbaker accountable for breaking the law, and getting these workers their money back.”

Shapiro is accusing one of Pennsylvania’s biggest road and bridge construction firms of stealing more than $20 million from its employees.

“Employers across this Commonwealth, you are on notice: if you steal from your employees, if you misclassify workers, if you violate our labor laws, we are going to find out, we are going to hold you accountable, and we will do all we can so Pennsylvania workers receive the wages and benefits owed to them under the law,” said Shapiro.

The Pennsylvania Prevailing Wage Act and the Davis-Bacon Act were enacted to level
the playing field and protect workers by ensuring that all contractors working on projects
that receive state or federal funding pay the same wage rates, which are determined by
state and federal agencies. Contractors are permitted to satisfy a portion of the required
wage by providing fringe benefits to employees. This portion is referred to as a “fringe
benefit credit,” and is calculated by determining the hourly equivalent of the value of the
benefit to the contractor.

While Hawbaker boasted that it provided great employee benefits, prosecutors say the
company was stealing its workers’ retirement, health, and welfare money. As a result of
Hawbaker’s conduct, individual workers lost tens of thousands of dollars from their
retirement. Shapiro says Hawbaker used its workers’ fringe benefit funds to lower costs, and increase profits.

These charges conclude a three-year investigation into the company’s practices for
calculating and claiming fringe benefit credits. Investigators discovered that the
company stole wages from its workers by using money intended for prevailing wage
workers’ retirement funds to contribute to retirement accounts for all Hawbaker
employees – including the owners and executives. As a result, workers received less
money in their retirement accounts than what was owed.

Hawbaker also allegedly stole funds intended for prevailing wage workers’ health and welfare benefits and used them to subsidize the cost of the self-funded health insurance plan that covers all employees.

Attorney General Shapiro recognized the people on the ground who noticed the theft
taking place and thanked them for sounding the alarm.

“I recognize that thousands of people across Pennsylvania are finding out for the first
time that they were a victim to this company’s crimes. If you are a worker and you
believe that you may have lost out on benefits because of this company’s actions, we
want to hear from you,” concluded Shapiro. “We’ve set a hotline for workers to reach
out: 814-746-3518.”

NOTE TO SELF:
Happiness is letting go
of what you assume
your life is supposed to
be like right now, and
sincerely appreciating it
for everything that it is.
So, relax. Reset.
You are enough.
You have enough.
You do enough.
Breathe deep. Let go,
and just live right now.

As vaccines become more widely available, it’s likely that many more colleges will add their own mandates.
https://www.witf.org/2021/04/11/should-colleges-require-covid-19-vaccines-for-fall-more-campuses-are-saying-yes/

This is very smart, and balanced! https://bariweiss.substack.com/p/what-should-be-done-to-curb-big-tech

Happy opening day! Best of luck and health to all guys around the league. Best part about this season is that we get to welcome fans back for a full 162 game slate, let’s get it going!!