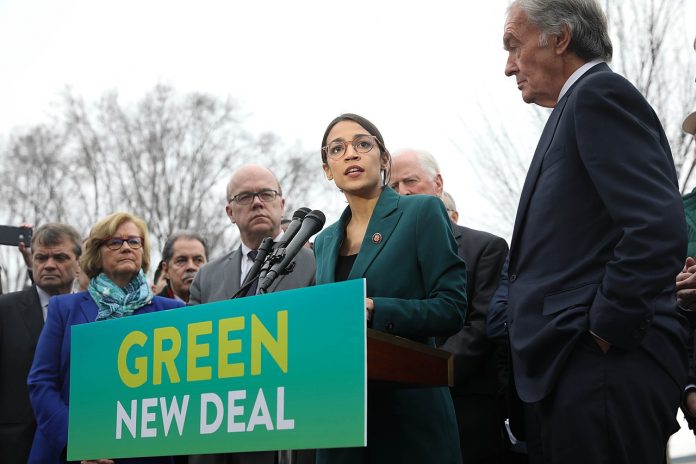 By Tom Tillett (Susquehanna Valley Center for Public Policy) – Congresswoman Alexandria Ocasio-Cortez (or AOC) has once again created a whirlwind of controversy by using words in a reckless manner.  Her carelessness this time was particularly egregious and evoked such strong emotional reactions by using the term “concentration camps” to describe detention facilities set up to house migrants crossing illegally into the United States from Mexico.

The extreme controversy and extraordinary sensitivity today regarding the term comes from its centrality to the Holocaust, the attempt by Nazi Germany to murder all European Jews (and others) from 1933 to 1945.  Soon after Adolf Hitler became the German chancellor on January 30, 1933, two concentration camps (Konzentrationslager or KZ) were opened in Dachau and Oranienburg  (Sachsenhausen).   By the end of the war, the Nazis had established 28 major concentration camps and countless thousands of sub-camps.  The majority of these camps were in Germany.

After World War Two as scholarship and general knowledge about the Holocaust grew, the term became indelibly connected to the Holocaust.  In fact, for many Americans, if they knew anything about the Holocaust, it was the existence of the concentration camps, and the terrible, horrific conditions the prisoners experienced.

While somewhat controversial within the Holocaust academic community, the Holocaust was a singular event in human history, a concept known as “Holocaust Singularity.”  In other words, the events from 1933 to 1945 in Europe are absolutely unique in human history.  Since the concentration camps are arguably the most salient physical aspect of this singular historical event, then the term can only be used correctly in the context of the Holocaust.

Historical Note – This essay is focused on “concentration camps” since AOC used that term.  There were two other main categories of camps, extermination camps (Vernichtungslager) and work camps (Arbeitslager).  The five official extermination camps were all in occupied Poland and had only one purpose – mass murder.  I would argue that all Nazi camps were in fact extermination camps; however, death was slower, and caused by mistreatment, starvation, and disease.

AOC dishonors and trivializes the reality faced by the prisoners living in the Nazi camps.  It is outside the scope of this piece; however, I can assure you that the people held in the detention centers do not face the specter of a violent and brutal death at any time for any reason.

There were both a massive number of rules and no rules at all.  Even the slightest violation of a rule almost always led to a draconian punishment.  The huge number of rules kept the prisoners in a constant state of terror by deliberate design.

New prisoners who did not speak German were in particular danger because not immediately complying with an order often was met with a bullet to the brain.  Making eye contact with an SS guard was strictly prohibited so prisoners walked with their heads down.  When prisoners took their caps off, they were required to hit the side of their pants to make a particular sound.  An incorrect sound could lead to a brutal beating.

Auschwitz, located in Poland, was somewhat unique in that it was comprised of elements of all three types of camps.  There were standing cells a meter square where four men were forced to stand all night, and then work the next day.  You could be sentenced to a standing cell for up to two weeks.  The “goat,” as the prisoners called it, was a small table that you bent over on, and typically received 25 lashes from a whip.  The “post” was a punishment where your hands were tied behind your back, and then you were lifted off the ground and hung with your shoulders rotated up behind you.  You hung there for one hour.  The goat and post were often death sentences because those unable to work were immediately murdered.

Block 11 in Auschwitz I was a prison within a prison, and also the location of the starvation and suffocation cells.  These were fairly large cells where prisoners were placed to starve to death, or slowly suffocate because there was no air allowed in.

The roll calls held twice daily were dreaded by the prisoners.  They wore paper thin pajama like uniforms, and often at best had very uncomfortable wooden clogs on.  Many went bare foot.  The roll calls sometimes lasted for hours and were held outside in all weather conditions.  Frostbite and gangrene were common among prisoners.

Prisoners were constantly hungry, thirsty, and tormented by rats, fleas, and lice.  Breakfast was an ersatz “coffee,” lunch was some watery “soup” with maybe a few vegetables in it, and dinner was a few grams of bread, some low quality sausage, marmalade, and if lucky sugar.

Women and children were targeted for death as well.  Ravensbruck, a large camp exclusively for women was particularly notorious for the brutal and horrific medical experiments conducted on prisoners.  As the war progressed, more and more children were sent to the camp.  The SS once put most of the children in a barrack ostensibly for a party.  The real purpose was to set it on fire and kill the children.  Only quick thinking by older prisoners stopped the massacre.

I have no doubt that AOC deliberately used what she knew was a loaded term; however, her ignorance of the singular event known as the Holocaust reflected poorly on her, and far more importantly, dishonored the memory of the millions who were murdered by the Nazis.

Tom Tillett, served as district chief of staff for U.S. Rep. Joe Pitts, who represented the 16th Congressional District until Pitts’ retirement in 2016.