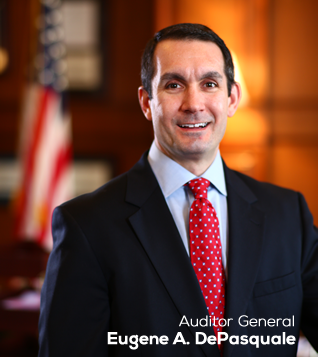 Auditor General Eugene DePasquale today said that the York County Recorder of Deeds office could not explain the account balance of more than $2.14 million held in an escrow fund.

A recently completed audit found the lack of accountability of funds held in escrow dating back to 2009 where county officials failed to complete monthly liability reports showing when the money was collected and to whom the funds were due.

“My team traced this problem back a decade,” DePasquale said. “There must be a full accounting of the millions of dollars in public funds and a change in operations moving forward. There should be a paper trail on every penny of taxpayer funds at all times.”

The recorder of deeds office collects associated fees due to municipalities, such as real estate transfer fees. The money is then disbursed to the appropriate municipalities. Since 2009, there are no monthly reports verifying to whom the monies were owed.

A 2016 audit report which covered 2009 to 2014 first identified the problem. At that time the former recorder of deeds did not provide a response as to how the office planned to address the finding of inadequate accountability over funds held in escrow.

DePasquale said he gives credit to Laura Shue, current county recorder of deeds, for finally addressing the audit finding. In her discussions with auditors, Shue said she is committed to rectifying the issue.

“I am hopeful that the current recorder of deeds will bring clarity to this issue. She seems committed to making sure tax dollars are accounted for and protected,” DePasquale said.

The recently completed audit covering 2015 through 2017 found that all state funds handled in the recorder of deeds’ office were accounted for appropriately.

Review the York County Recorder of Deeds audit report and learn more about the Department of the Auditor General online at www.PaAuditor.gov.

.@realDonaldTrump on the historic Abraham Accord⬇️

“Nobody thought this was something that could happen for a long time. It is the most important diplomatic breakthrough since the Egypt-Israel peace agreement was signed over 40 years ago.”

You can help others exercise their right to vote by becoming a poll worker. Contact your county to see how you can help: http://votesPA.com/GetInvolved #votesPA

I keep up these tweets each day because it is unacceptable for a Commander in Chief to leave our troops behind when a foreign adversary may have offered bounties for their deaths.

Until Donald Trump speaks up, I'll keep speaking out. Day 49.