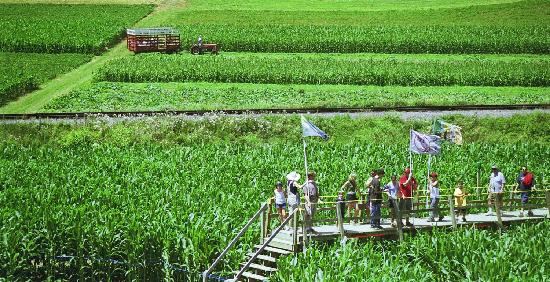 NASA is offering new opportunities for America to celebrate with the agency the 50th anniversary of the historic Apollo 11 Moon mission and look to the future of exploration on the Moon and Mars.

Apollo A-Maze-Ment Throughout the summer, Cherry Crest Adventure Farm in Lancaster, Pennsylvania, is presenting an Apollo-themed corn maze for tourists. NASA and local and agriculture industry representatives will participate in stage talks and media interviews about the intersection of NASA technology, farming in America, and our everyday lives on Earth – demonstrating the return on investment of tax dollars. There will be talks by NASA’s Deputy Chief Technologist David Steitz, astronaut Alvin Drew, and Technology Transfer Program Executive Dan Lockney.  Go to https://www.cherrycrestfarm.com/farm-events for more details.

Apollo 50 on the National Mall

NASA and the Smithsonian National Air and Space Museum are hosting the Apollo 50 Festival, a free three-day event on the National Mall in Washington, July 18-20. The event will include exhibits, speakers, demonstrations and a host of fun activities for the entire family. NASA researchers, scientists and engineers will showcase NASA’s newest technologies and innovations that will take us forward to the Moon and on to Mars. Festival hours are 9 a.m. to 5 p.m. July 18 and 19, and 9 a.m. to 8 p.m. July 20.

Dedication of 1969 Moon Landing Stamp The U.S. Postal Service will celebrate the 50th anniversary of Apollo 11 and humanity’s first steps on the Moon with two Forever stamps. It will dedicate the stamps in a ceremony at 11 a.m. at the Apollo/Saturn V Center of the Kennedy Space Center Visitor Complex in Florida. The ceremony is open to the public with paid admission.

The show also will feature slices of Americana at other anniversary celebrations around the country.

NASA also will bring Apollo 50th anniversary participants together to take part in a virtual engineering design challenge on social media. Along with each of its museum partners, NASA invites the public to help build a component of NASA’s return to the Moon using simple household materials.