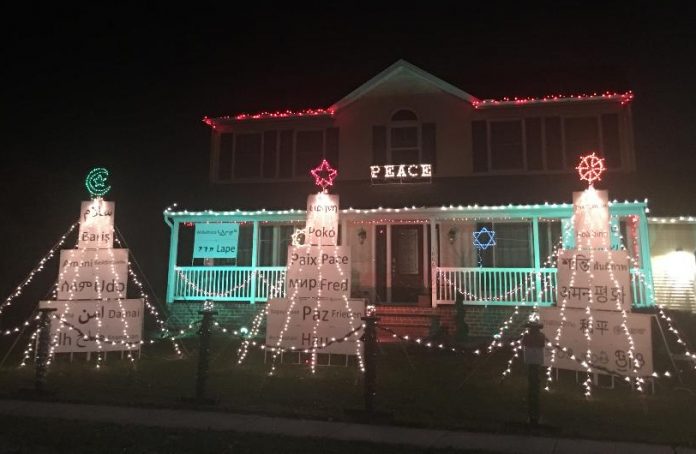 Paix. Pace. Paz. Frieden. Hau. Poko.  Damai.  One word.  45 different languages.  They all mean the same thing, peace!  David Grinberg of Mechanicsburg, Cumberland County is spreading that message of peace from around the world in a unique holiday display in his front yard.

“What I learned in exposure to many different cultures is that while we speak many languages and have different cultural priorities and attitudes, we share many aspirations. This time of year is a great time to acknowledge peace as one of those shared aspirations”, said Grinberg.

As a military linguist for the Marines. Grinberg specialized in Middle-Eastern languages.  He spent hours researching translations for the word peace. He then had the words printed on signs and assembled them to look like Christmas trees, brought to life with thousands of lights. 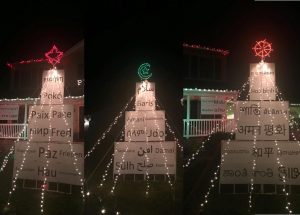 8 months in the making, this was a labor of love for Grinberg who admits having a bit of empty nest syndrome.  His only son is away at college and this was a way to fill the void in his heart.

“My hope is that people ponder that we all share the hope for peace and prosperity but must reach across the boundaries of language and symbols to get there. There is almost nothing we can’t do, no problem we can’t solve, if we all can work together to get there”, said Grinberg.

Grinberg and his wife worked together on the project.  Sheryl Grinberg pitched in with painting and topped the trees with the illuminated decorations.

“I knew it meant a lot to Dave and it was project that we could work on together.  With everything that has gone on from the pandemic to our son being away, this was a way to offer a message of inspiration and hope this holiday season”, said Sheryl Grinberg.

The trees of peace will be on display through January at 1006 Baythorne Drive in Mechanicsburg. There are pamphlets to explain each language and help with pronunciations.  The display does include one non-human language. Hint: it’s a language created for the movies by professional linguist Dr. Marc Okrand.