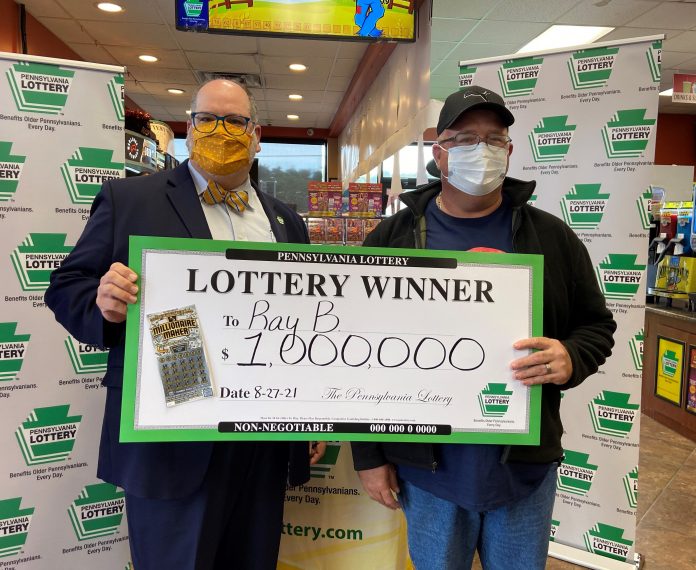 Officials from the Pennsylvania Lottery and Ugo, a Lottery retailer, presented a commemorative check to the winner of a recent $1 million Scratch-Off ticket called Millionaire Maker. The check presentation was held at Ugo, 424 N. Baltimore Avenue, Mount Holly Springs, Cumberland County, where the winning ticket was sold. The store receives a $5,000 bonus for selling the big winner.

The winner, Ray Boose Jr. of Cumberland County, said he enjoys playing Scratch-Offs from the  Pennsylvania Lottery and purchased the big winning ticket on Friday, August 27.

“My wife says I’m probably the luckiest person she knows,” said Boose. His wife might have also said that because earlier this year, Boose scratched off a $100,000 Mining for Millions-winning ticket!

“The day I won $1 million, my wife asked me to go to Ugo, and I had a few other tickets I wanted to cash,” said Boose. “I was sitting out in the parking lot scratching it and was like, ‘Oh my goodness.’ I was speechless. I called my wife. It just didn’t seem real!”

Boose said his wife was also in disbelief.

“My wife said, ‘Come home now. I want to see the ticket!’” he said. “I won on a Friday and went to see a house that Saturday! It’s under contract.”

This father of two and grandfather of five said this prize is like a dream. Changing zip codes will also allow him to live closer to where he works at a plumbing warehouse.

“We always tell our players that it only takes one ticket to win big,” said Pennsylvania Lottery Executive Director Drew Svitko. “Congratulations to Ray for winning this top prize and thank you to our many retailers across the commonwealth, such as Ugo, for partnering with us to sell Lottery tickets. Our retailers play a big part in the Lottery fulfilling its mission of responsibly generating funds for programs that benefit older Pennsylvanians.”

The PA Lottery Scratch-Off Millionaire Maker went on sale on February 23, 2021 and is a $20 game that offers top prizes of $1 million.