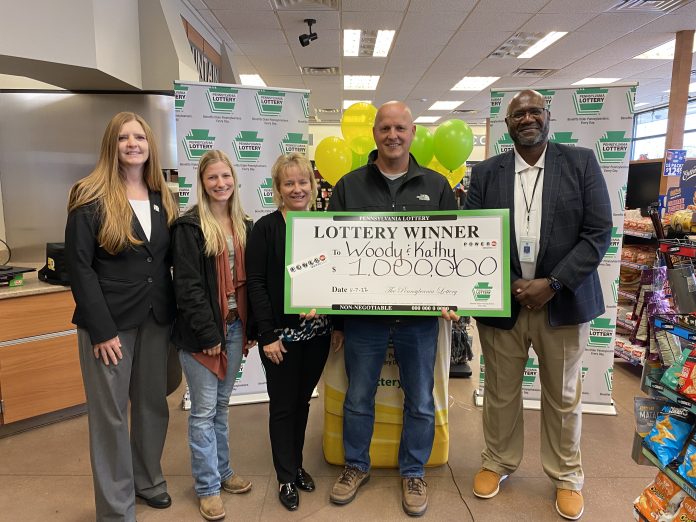 Officials from the Pennsylvania Lottery and Turkey Hill, a Lottery retailer, presented a commemorative check to the winners of a recent $1 million Powerball ticket, which was sold during the historic November 7th drawing. The check presentation was held at Turkey Hill, 7601 Allentown Boulevard, Harrisburg, Dauphin County, where the $1 million winning ticket was sold. The store receives a $5,000 bonus for selling the winning ticket.

Woody and Kathy Raptosh, the winners of the $1 million ticket, were looking to join in on the fun last week as the Powerball® jackpot reached an all-time world record of $2.04 billion. Although a single jackpot-winning ticket was sold in California, the drawing also produced an unforgettable moment for the Raptosh family. Woody and Kathy, who live in Dauphin County, say they can’t believe this happened to them.

“I saw the Turkey Hill and stopped by. I said to the clerk, ‘Give me $20 quick pick for Powerball, got my tickets and went home,” said Woody. “I said to my wife, ‘That’s the West Hanover Township Turkey Hill that sold the $1 million winning ticket and that’s where I bought my ticket.’”

Woody said he showed his ticket to his daughter, as they both checked to see if it was a winner.

“She started screaming and saying, ‘No way, no way!’ It took me longer to read the numbers until I realized we had the winning ticket,” said Woody.

“I was in the bedroom and heard my daughter scream. I thought, ‘What is happening?’” said Kathy, Woody’s wife. “He said, ‘Kathy check this out!’”

“My heart was racing!” said Woody, who plans to visit a financial advisor. Woody said that after 35 years of working for the Commonwealth as a civil engineer, he’s ready to retire and this will help.

“We can also do some home improvements and help the kids,” added Woody.

To determine if they have won a prize, players can review the ticket, scan it at a Lottery retailer or use the ticket checker feature on the Lottery’s Official App. Winners should immediately sign the back of the ticket, call the Lottery at 1-800-692-7481 and make an appointment to file a claim at the nearest Lottery office.