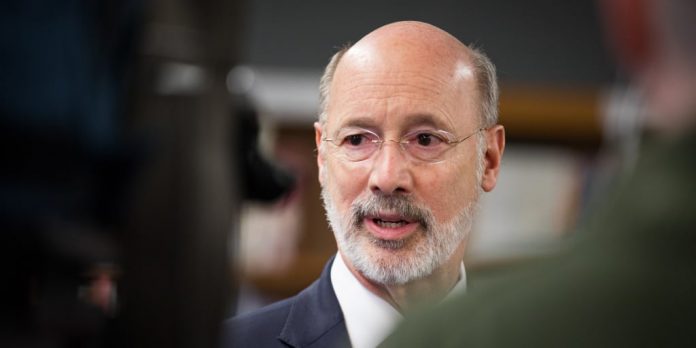 Governor Tom Wolf outlined plans for his trip to Lithuania and Poland to visit Pennsylvania National Guard (PNG) troops, meet with country leaders, and leave remembrances of the 11 victims of the October 2018 Tree of Life antisemitic attack at two Holocaust memorial sites. He was joined by PNG Maj. General Anthony Carrelli, and two members of the Lithuanian National Defense Volunteer Force, a 44-man platoon exchange that is training at Ft. Indiantown Gap until Sept. 12.

“On Sunday, at the invitation of the Pennsylvania National Guard, I will depart on a long overdue trip to visit our nearly 600 Pennsylvania National Guard troops currently overseas in Lithuania and Poland,” Gov. Wolf said. “The Guard members training alongside Lithuanian troops in Pabrade and those deployed to Poland are making a tremendous sacrifice. They are missing birthdays, anniversaries, soccer games and holiday gatherings and their families and loved ones are missing them in return. We owe them an enormous amount of gratitude. This visit is so important to me that I will be paying my own way and taking limited staff with me.”

The Pennsylvania National Guard State Partnership Program with the Lithuanian Armed Forces was established in 1993 as Lithuania regained its independence from the Soviet Union. Since the inception of the program, the Pennsylvania National Guard and Lithuanian Armed Forces have conducted hundreds of security cooperation engagements, completed numerous co-deployments, conducted annual platoon and company exchanges, and participated together in numerous exercises.

In Lithuania, Gov. Wolf also will meet with President Gitanas Nauseda, speak to members of the American Chamber of Commerce in Lithuania, tour sites of cultural significance, meet with the Lithuanian Minister of Agriculture and representatives of Lithuanian food companies and talk with many other key business and political representatives.

He will visit the Paneriai memorial in Lithuania, and Auschwitz-Birkenau in Poland, carrying a mezuzah damaged at the Tree of Life shooting with him. The mezuzah is a holy scroll for the Jewish faith.

The governor also plans to write the names of the 11 Pennsylvanians who lost their lives in the antisemitic attack at the synagogue in visitor books at both sites to honor their memories.

“I hope this act will bring solace to the survivors and remind them that we will never forget their loved ones,” Gov. Wolf said.

The governor’s trip will last for eight days, including travel.

Our second #PABudget hearing of the day is:
🔵 Department of State

#HappeningNow: Discussion of sweeping changes to PA elections and more at the #PASenate #PAbudget hearing with @PAStateDept.

The #SenDemPolicy Committee will discuss combating and treating drug overdoses in Philadelphia on Friday.

The Baltimore Sun's newsroom has fallen from 400 to 80. It fears even deeper cuts now that Alden Global has a stake.

Yet it still laid bare the then-mayor's sale of $800K in laughable children's books to buyers w/ vested interests.

@lukebroadwater just won a Polk for it. Bravo