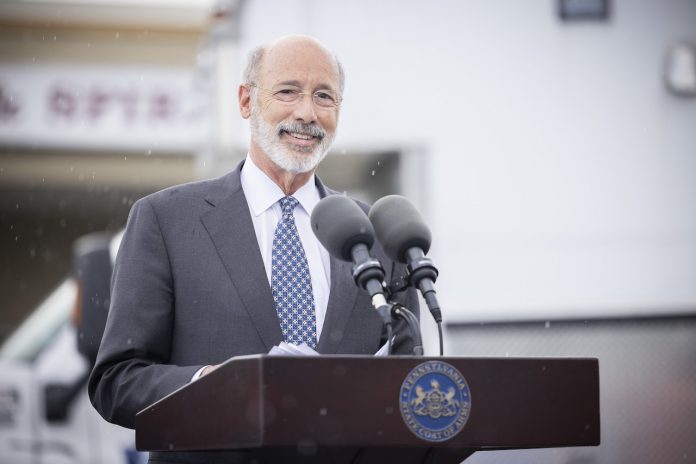 Governor Tom Wolf unveiled his agenda for safer workplaces, guarantee paid leave and increase worker pay, among other worker-centered improvements. The governor signed an executive order and called on the General Assembly to pass legislation that supports workers.

“With our economy on the comeback, there are so many job openings that people can select the option that is best for their family. This is a critical moment for Pennsylvania workers, and it’s time we stop asking why there is a labor shortage and start asking how we can make jobs better,” said Gov. Wolf.​ “With Pennsylvanians renowned for our work ethic, this is an opportunity to improve jobs in the state, which will attract and retain hardworking people to live here and bring new industries to the commonwealth that want a talented, skilled and dedicated workforce.

The governor is directing L&I and the Office of Administration to study the feasibility of implementing Occupational Safety and Health Administration (OSHA) standards in offices under the governor’s jurisdiction. State agencies will also ensure those receiving state grants and contracts protect their employees by following labor laws and understand the consequences of not complying.

The governor is also calling on the legislature to extend OSHA safety rules to all public employees ​– safeguards the nation’s private sector and federal employees have benefitted from for 50 years. S.B. 310, sponsored by Sen. Tina Tartaglione, and H.B. 1976, sponsored by Rep. Pat Harkins, would ensure public employees know their safety is a priority.

The governor is directing DCED to verify a business receiving an offer of assistance provides its workers paid sick leave and pays no less than the minimum wage for state employees before making a financial incentive offer. The $13.50 minimum wage for state employees and contractors will reach $15 on July 1, 2024, under an executive order the governor signed in 2018.

The governor is also urging the legislature to pass S.B. 13, sponsored by Sen. Vince Hughes, and H.B. 1035, sponsored by Rep. Mike Zabel, which would provide paid sick leave to workers in Pennsylvania. An estimated 400,000 Pennsylvania workers lack paid sick leave, which forces them to work when sick, risking their health and those around them. Providing paid sick leave would improve public health and prevent more people from getting sick, a protection that is beneficial to both workers and their employers.

In addition to executive action on minimum pay for businesses receiving DCED offers, the governor called on the General Assembly to pass S.B. 12, sponsored by Sen. Tina Tartaglione, or H.B. 345, sponsored by Rep. Patty Kim, to raise Pennsylvania’s minimum wage to $12 an hour with a path to $15 and remove local preemption.