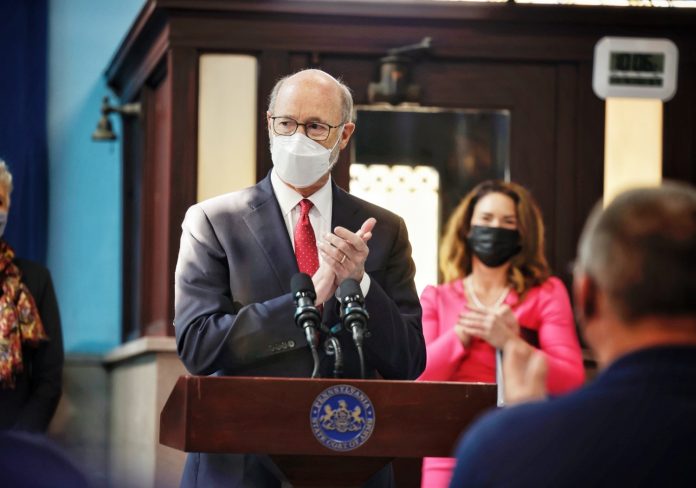 The governor visited Erie and Allentown to discuss his recently issued executive order that supports workers and to urge the General Assembly to pass legislation.

“There are so many job openings that people are choosing the best option for their family. It’s time we stop asking why there is a labor shortage and start asking how we can make jobs better,” said Gov. Wolf. “It’s time for us to look ahead and imagine the future of work. That’s exactly what my plan does by creating safer workplaces, guaranteeing paid leave and promoting higher wages for workers.”

The governor’s executive order directs L&I and the Office of Administration to study the feasibility of having Occupational Safety and Health Administration (OSHA) standards apply to offices under the governor’s jurisdiction. State agencies will also ensure those receiving state grants and contracts follow labor laws and understand the consequences of not complying.

Beyond his executive authority, the governor is urging passage of Sen. Tina Tartaglione’s S.B. 310 and Rep. Pat Harkins’ H.B. 1976 to extend OSHA safety rules to all public employees ​– safeguards the nation’s private sector and federal employees have received for 50 years.

Paid Sick Leave
The governor’s executive order also directs the Department of Community and Economic Development (DCED) to verify businesses receiving future offers of assistance through the Governor’s Action Team provide their workers paid sick leave and pay no less than the minimum wage for state employees. The minimum wage for state employees and contractors is $13.50, and will reaches $15 on July 1, 2024, under an executive order the governor signed in 2018.

“Pennsylvanians should never have to choose between losing a day’s pay or going to work sick,” said Gov. Wolf. “That’s just wrong and is bad for workers and businesses. Paid sick leave keeps illness out of the workplace, protects other employees and ensure customers stay confident that they will be safe when visiting a business.”

Increase Worker Pay
The governor has proposed a commonsense minimum wage increase for seven years, but the legislature has failed to act, leaving Pennsylvania behind all our neighboring states with a wage floor of only $7.25.

The governor again urged the General Assembly to finally pass S.B. 12, sponsored by Sen. Tina Tartaglione, or H.B. 345, sponsored by Rep. Patty Kim, to raise Pennsylvania’s minimum wage to $12 an hour with a path to $15 and remove local preemption.

Eight states are on a path to $15, including red states, and President ​Joe Biden is raising the federal minimum wage for contractors to $15. Overall, 29 other states, including every state that borders Pennsylvania, have a higher minimum wage.

The governor’s executive order also directs L&I to pursue regulatory changes so people are fairly paid for their work time spent on security screenings, putting on required equipment and other activities. L&I is also pursuing regulations so workers whose wages depend on tips receive the full amount of their tips and that there is better clarity around tipping processes and definitions.

Other Worker-Supporting Actions
L&I also will post on its website a list of bad actors that violate labor laws, misclassify their workers, owe unemployment compensation back taxes, or fail to carry requisite workers’ compensation insurance.