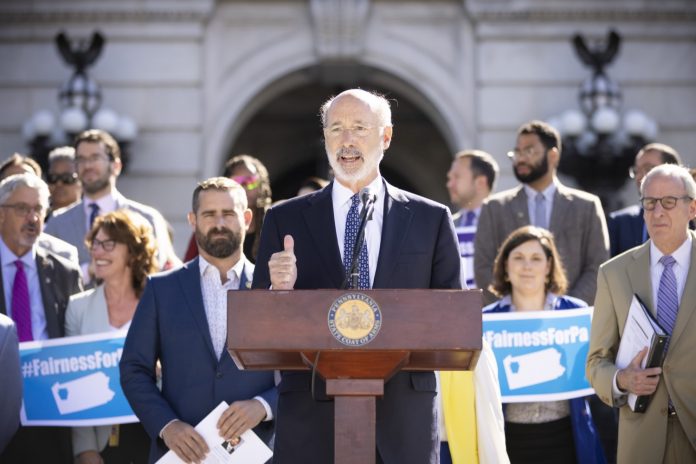 Governor Tom Wolf joined state lawmakers and members of the LGBTQIA+ community to reintroduce the Fairness Act. The Fairness Act is bipartisan legislation that extends non-discrimination provisions in state law to protect against discrimination based on sexual orientation and gender expression or identity.

“This legislation is long overdue in our commonwealth and will provide needed protections to members of our LGBTQIA+ community,” Gov. Wolf said. “As public servants, we have a duty to all of our constituents, to ensure that their rights are protected, and their interests are served. It is past time for our commonwealth to stop ignoring this infringement on the rights of LGBTQ Pennsylvanians and pass the Fairness Act.”

In April 2016, Governor Wolf signed two executive orders that expanded protections from discrimination based on sexual orientation, gender expression or identity for state employees and, for the first time, employees of contractors doing business with the commonwealth.

Last year, the United States Supreme Court issued a landmark decision in Bostock v. Clayton County which found an employer cannot discriminate against an individual because of their sexual orientation or gender identity.

This historic victory for civil rights provides some employment protections but does not prevent a Pennsylvanian from being denied housing, education or access to public accommodations because of who they are or who they love.

Cumberland County Man Shares Message of “Peace” from Around the World