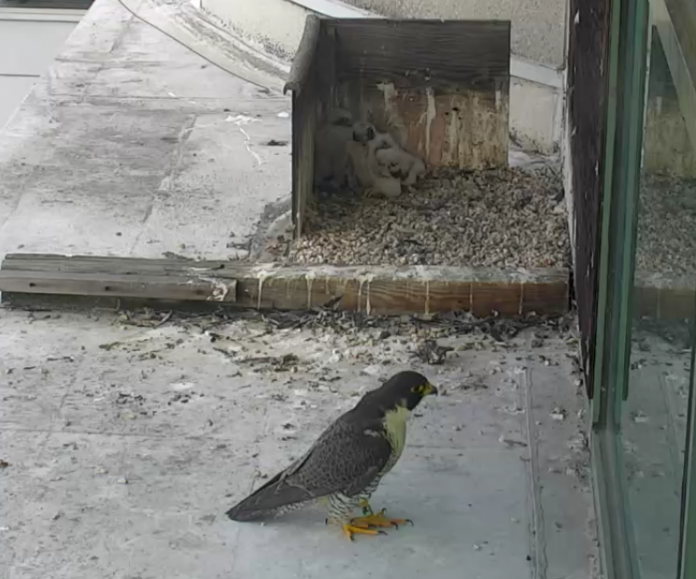 Game Commission biologist Patti Barber led a team in bringing the nestlings in from the 15th floor ledge. Barber weighed the birds, inspected their health, and banded them.

Banding the falcons allows biologists and birdwatchers from all over the continent to track the birds and help us learn more about where they travel, how long they’ve lived, and whether they’ll establish new nests in other places. Falcons born on the ledge at the Rachel Carson building have been tracked to locations from Florida all the way to Canada.

The peregrine falcon was removed from the federal Endangered Species List in 1999 and the Pennsylvania Threatened List in 2021 but remains federally protected under the Migratory Bird Treaty Act and the state Game and Wildlife Code.

Eighty-three falcons have now hatched since reproduction began in 2000. This makes the Rachel Carson State Office Building nest site the most prolific in the commonwealth.

DEP has a live falcon cam on the ledge to see the falcon nestlings and the adult birds.

American schools are sandcastles on the beach of unchecked gun violence. We can’t possibly keep up with the erosion caused by waves of legislative inaction at the state and federal levels.
https://northpennnow.com/north-penn-school-board-issues-statement-on-gun-violence-p5628-117.htm