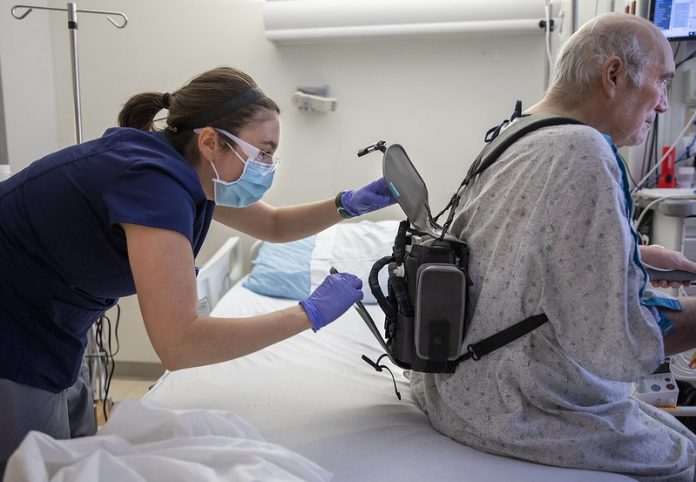 Penn State Health Milton S. Hershey Medical Center became the second hospital in the nation to implant a newly-designed mechanical pump in a patient with severe heart failure. Researchers hope the device, which can be used as a destination (long-term) therapy and as a bridge to transplant (short-term therapy), will reduce some of the risks patients face with current left ventricular assist devices (LVADs), which includes strokes and gastrointestinal bleeding.

Richard Huggins, 75, of Lock Haven, Pa., was the second patient in the nation to receive the EVAHEART2 Left Ventricular Assist System (LVAS). Surgeons at Penn State Heart and Vascular Institute implanted the device on Jan. 13.

Heart failure affects more than 6 million adults in the U.S. and occurs when the heart is unable to adequately pump blood and oxygen to the body in an efficient way. It causes fatigue, shortness of breath and other physical limitations for patients. Current treatment options for patients with worsening heart failure include open heart surgery for transplantation or the implantation of an LVAD, which is a mechanical pump that helps the heart’s left ventricle pump blood to the rest of the body.

Dr. Rob Dowling, director of heart device research at Penn State Heart and Vascular Institute and Penn State College of Medicine and one of the surgeons who implanted the pump, said the EVAHEART2 left ventricular assist system was designed to reduce the risk of post-implantation stroke, which affects approximately 8% of heart failure patients implanted with an LVAD.

“Imagine inserting the tip of a vacuum cleaner into the left ventricle of the heart to get the blood to the pump and out to the rest of the body,” Dowling said. “Sometimes the tip can move into an incorrect position even after proper surgical placement and can create suction against the walls of the heart. This may create blood clots that could cause strokes. This new device was designed in such a way that there is no tip, but rather the “vacuum” hose itself is surgically attached directly to into the lining of the walls of the heart, removing the need for a tip and thereby potentially reducing the risk of stroke.”

The procedure was part of the COMPETENCE Trial, a multi-center clinical study to evaluate EVAHEART2 that will include 40 clinical sites and 399 patients with severe heart failure through 2022.

“To be one of the first in the nation to use this new LVAD technology is an incredible opportunity for patients in central Pennsylvania and puts us at the forefront of cardiac research in the region,” Dowling said. “Penn State Health is committed to giving patients access to leading-edge cardiovascular treatments. The care provided by our nurses, research team, intensive care unit team and cardiologists is second to none.”

Hershey Medical Center has a long history of adopting new artificial heart technology, dating back to the 1970s when researchers developed and tested the Penn State Heart-Assist pump, a small pump used as a bridge to cardiac transplantation. In 1975, researchers received permission to test the pump in humans and that same year, they implanted their first device. In 1985, researchers began to use the first artificial heart developed at Penn State, consisting of two modified Penn State Heart-Assist pumps. Hershey Medical Center has more than 40 ongoing cardiovascular clinical research studies.