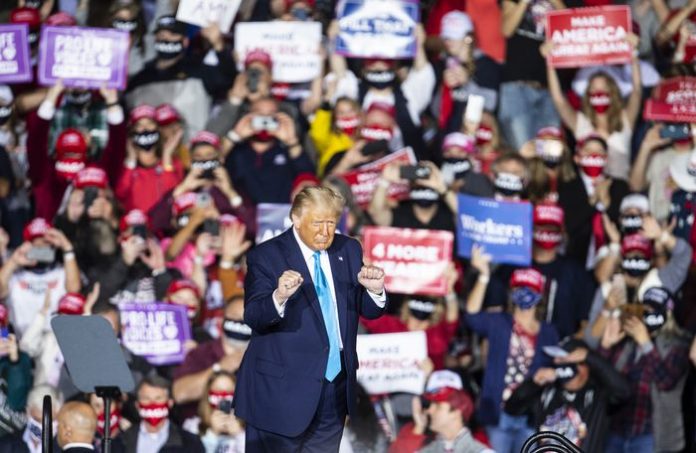 President Donald Trump took a central Pennsylvania stage with a fresh, major achievement to tout: his hours-old pick of Amy Coney Barrett to fill the seat of the late Justice Ruth Bader Ginsburg on the U.S. Supreme Court. If she’s confirmed, Republicans will realize their long-running goal of a conservative-dominated court. A large monitor above the audience read: “FILL THAT SEAT!”

Then, Trump pivoted to his primary theme for Saturday night, bashing Democratic opponent Joe Biden.  After referring to Barrett’s stellar academic record, Trump said, “That’s a little better than Joe Biden, wouldn’t you say? She should be running for president.”

Thousands attended the outdoor rally at Harrisburg International Airport near Harrisburg. A drizzle began falling shortly before Trump began; he stood under it unsheltered in a blue suit. Even in the dreary weather, Trump still spoke for more than an hour.