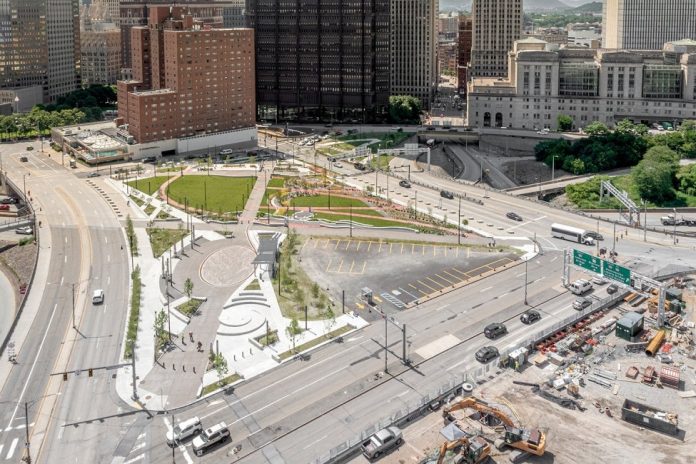 The Pennsylvania Department of Transportation announced that its I-579 Cap Urban Connector project is among the Top 12 finalists in the American Association of State Highway and Transportation Officials’ 2022 America’s Transportation Awards competition.

The Top 12 finalists – whittled down from 80 nominees from 37 state DOTs via those four regional contests – now compete for the Grand Prize and the People’s Choice Award. Both prizes come with a $10,000 cash award for a charity or transportation-related scholarship of the winners’ choosing.

“We hope that Pennsylvanians will support this project by voting in the competition,” said PennDOT Secretary Yassmin Gramian. “This recognition truly reflects the department’s focus on innovative, equitable, smart, and sustainable transportation.”

In the 1950s, homes and businesses in Pittsburgh’s Lower Hill District neighborhood were demolished to construct the Civic Arena and other developments. During that time, Interstate 579 was built, creating a “concrete canyon” of tall retaining walls and noisy interstate traffic, separating the Hill District from Downtown. In 2012, the Civic Arena was demolished. As part of the vision for this area, reconnecting this neighborhood to the downtown core became a priority. The I-579 Urban Open Space Cap bridges the interstate with a new, three-acre green space and restores the long-lost direct link to the economic opportunities and amenities of downtown Pittsburgh.

The I-579 Cap was sponsored by the Pittsburgh Sports and Exhibition Authority (SEA). PennDOT oversaw the construction of the project, and the City of Pittsburgh now owns and maintains the park and recreation area. The park is called Frankie Mae Pace Park, named in honor of a longtime advocate for the Hill District and its residents.

The project team used a robust community listening, and design review process to obtain input from residents and other stakeholders for the public urban open space that makes up the surface of the Cap. Through this process, six key themes emerged for the new park: water, green, destination, music, seating, and connection. These elements were incorporated through the park landscape design, as well as integrated art. Specific expressions of these themes were developed by a team of artists from the Hill District and incorporated by the project landscape architect and refined through public meetings.

Sponsored by the American Association of State Highway and Transportation Officials, AAA, and the U.S. Chamber of Commerce, the competition evaluates projects in three categories: Quality of Life/Community Development; Best Use of Technology & Innovation; and Operations Excellence. The projects are also divided into three sizes: small (projects costing up to $25 million); medium (projects that cost between $26 million to $200 million); and large (projects costing more than $200 million).

An independent panel of transportation industry experts will select the Grand Prize winner, while the general public will decide the People’s Choice Award winner through online voting. Online votes will be weighted to each state’s population, allowing for greater competition between states with larger and smaller populations. Online voting is open now and ends at 11:59 p.m. on October 21.

Cast your vote for the I-579 Cap project here. Individuals can cast no more than one vote per device per day.