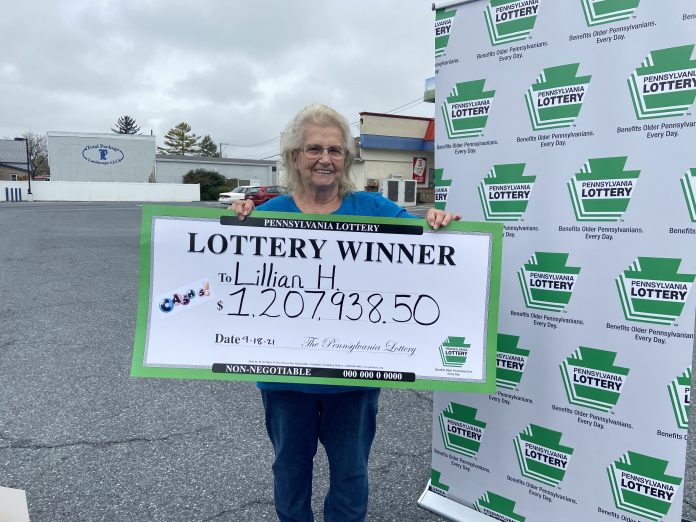 Officials from the Pennsylvania Lottery and Charlies Fuel & Deli presented a commemorative check to the winner of a recent $1.2 million Cash 5 with Quick Cash jackpot. The check presentation was held at Charlies Fuel & Deli, 1634 W. Main St., Ephrata, Lancaster County where the jackpot-winning ticket was sold.

The big winner, 83-year-old Lillian Hess of Lancaster County, says she has played the Pennsylvania Lottery’s longest-running jackpot game, Cash 5, for years. In March 2021, the game re-launched as Cash 5 with Quick Cash, the same nightly draw game that players have always enjoyed, but it now offers a chance to instantly win $2 or $6.

“The funny thing is I usually check my numbers when the TV station has the drawing on, but I changed the channel, so I didn’t see it,” said Hess. “After I got my Sunday paper, I saw it. I started screaming for my son to come and double check!”

“It was just a lot to take in. I’m going to pay my mortgage off and give some of it to my kids,” she said. “I’m still working, at home, sewing.”

And at 83, Lillian says she still mows her own grass.

“One of the first things I’m going to do is buy a new mower! A riding mower!” she added.

As for the location that sold her the big winner, Charlies Fuel & Deli received a $10,000 bonus.

“We were excited to hear that Lillian, a long-time customer of our store, won the big Cash 5 jackpot!” said Charlie Rutt, the store’s owner. “Being a Lottery retailer allows us the chance to not only offer entertaining products, but also help the growing senior population in Pennsylvania. Many thanks to my customers and employees for making this all possible.”

“Thanks to players like Lillian and retailer partners like Charlies Fuel & Deli, the Pennsylvania Lottery is able to do a great deal of good for older Pennsylvanians,” said Pennsylvania Lottery Executive Director Drew Svitko. “The Lottery is going to celebrate its 50th anniversary in March of next year and over those 50 years we have generated more than $32.6 billion in benefits for senior programs.”