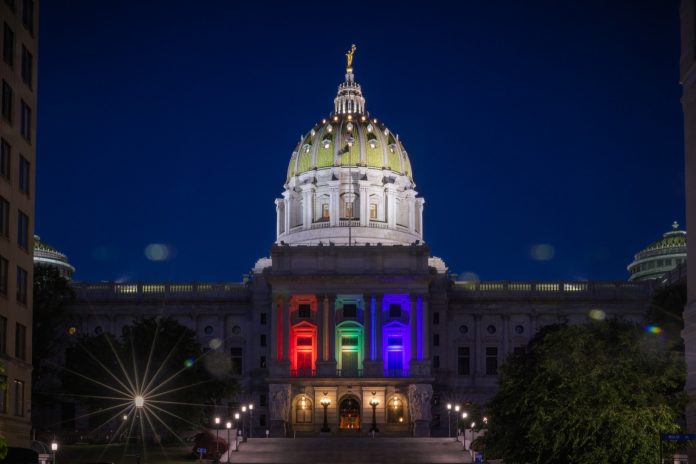 The Pennsylvania Commission on LGBTQ Affairs and education and youth advocates denounced Senate Bill 1278.  The legislation was approved along party lines by the Senate Education Committee and now heads to the full Senate for consideration.

The legislation was drafted in response to concerns senators have received from parents that age-inappropriate conversations about sexually-related topics are occurring prematurely and without parental knowledge in elementary school classrooms around the state.

“Pennsylvania was founded on the basis of inclusion, and the Wolf Administration has fought to ensure that Pennsylvania will continue to be a state that welcomes and protects all of its residents,” said Rafael Álvarez Febo, executive director of the LGBTQ Affairs Commission. “This bill, which was introduced in the middle of Pride Month, is a cruel attempt to politicize LGBTQ people and deny their humanity in order to score cheap political points.”

The bill limits what teachers in kindergarten through third grade can teach about sexual orientation and gender identity while never stating that anyone should not say the word “gay”.  The legislation states that such lessons “may not occur in kindergarten through grade 3, or in a manner that is not age-appropriate or developmentally appropriate for students in accordance with state standards.”

In addition to prohibiting classroom instruction on gender identity and sexual orientation for pre-kindergarten through fifth grade students, Senate Bill 1278:

“We at the Pennsylvania Commission on LGBTQ Affairs know that the guise of calling LGBTQ people and topics ‘age inappropriate’ is really just fearmongering. Bills like these will cause LGBTQ teachers to have to conceal their identities and strip any resources available for LGBTQ youth out of schools. Even more alarming, these bills have emboldened far right hate groups to mobilize to commit violence against LGBTQ people”‘ said Febo.

Sponsors of Senate Bill 1278 were careful to clarify that the legislation would not ban all discussions of sexual orientation and gender identity in school settings. Likewise, it would not prohibit teachers from having conversations or offering support services to students who are personally facing issues related to sexual orientation or gender identity and wish to address those issues with a school employee. Rather, the stated goal of the bill is to improve transparency and ensure parents have the opportunity to participate in making decisions about their own child’s education.

“It’s important to note that Senate Bill 1278 does nothing to prohibit organic, student-initiated discussions of sexual orientation and gender identity for any age group,” said Sens. Scott Martin and Ryan Aument, who sponsored the legislation. “Our goal is certainly not to ostracize, demonize, or harm LGBTQ students in any way; rather, we want to find a fair solution that honors the very real concerns of parents that these sensitive topics are consistently being taught without their consent or knowledge to elementary school students.”

Advocates for schools and children in Pennsylvania joined the commission to oppose the legislation.

“I have serious concerns about any effort aimed at censoring educators and preventing them from valuing, affirming, and supporting students and their families because of their sexual orientation or gender identity,” said ​Pennsylvania State Education Association (PSEA​) President Rich Askey. “Lawmakers should focus on the very real challenges facing our public schools right now, including reducing substitute and teacher shortages, hiring more mental health professionals in our schools, keeping our schools safe, and passing a state budget that properly funds public education. Educators spend their lives teaching and supporting their students. We don’t need politicians telling us how to do our jobs.”

“I was 11 years old when I first came out. I was scared when I realized that I was gay, since my home environment wasn’t the most affirming place,” said Freddy Pernell, commissioner for the LGBTQ Affairs Commission. “I was lucky that my school had a variety of experts and out teachers who I could go to for advice. These LGBTQ teachers became mentors that were crucial to my development into the person I am today. Efforts to keep conversations about identity out of schools will only hurt kids who are trying to come to discover who they really are.”