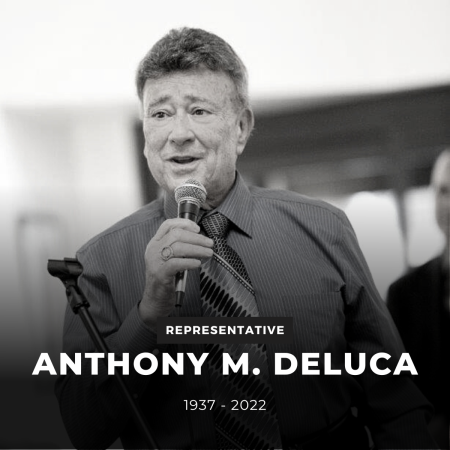 State Rep. Anthony M. “Tony” DeLuca (D-Penn Hills), the senior member of the Pennsylvania House of Representatives, died on Sunday, Oct. 9 at home after a brief battle with lymphoma, a disease he twice previously beat.  He was 85.

For 39 years DeLuca represented the 32nd Legislative District, comprised of Penn Hills, Verona, the majority of Plum Borough and now, in the most recent legislative redistricting, the Borough of Oakmont.

For more than 20 years DeLuca served as Democratic Chairman of the House Insurance Committee. In Harrisburg, his passion was to serve as a patient advocate with insurance companies, to ensure medical professional accountability, and to guarantee patient safety in all areas of medicine including pharmacies. Following his first lymphoma diagnosis and his late wife of 66 years Connie’s subsequent breast cancer diagnosis, DeLuca became an outspoken advocate for cancer awareness and early detection, while tirelessly supporting and introducing legislation to increase funding for local cancer research as well as improved treatment procedures and care after diagnosis.

In addition to the House Insurance Committee, he was a member of the Democratic Policy Committee, and several other caucuses including Autism, Cancer, Firefighters and Emergency Services (Chairman Emeritus), Mental Health (Co-Chair), Sportsmen, and Steel.

DeLuca said he learned the importance of treating people fairly and compassionately from his father, the son of Italian immigrants, who was a butcher and owner of a meat market in Pittsburgh’s East End’s “Little Italy” area known as Larimer Avenue.  DeLuca was proud of his Italian heritage and was one of the original co-founders and, eventual long-time chairman, of the PA Legislative American-Italian Caucus, created to combat social injustice and discrimination against Italian Americans.

A resident of Penn Hills for over 60 years, he got his start in politics serving on the Penn Hills Government Study Commission that helped draft the municipality’s Home Rule Charter, then five years as a Penn Hills Councilman, followed by two years as Penn Hills Deputy Mayor before running for his legislative seat and defeating the Republican incumbent.

DeLuca graduated from Westinghouse High School and the Community College of Allegheny County. He had four children, nine grandchildren and three great-grandchildren. In addition to his late wife, he was preceded in death by his brother Larry and his parents.