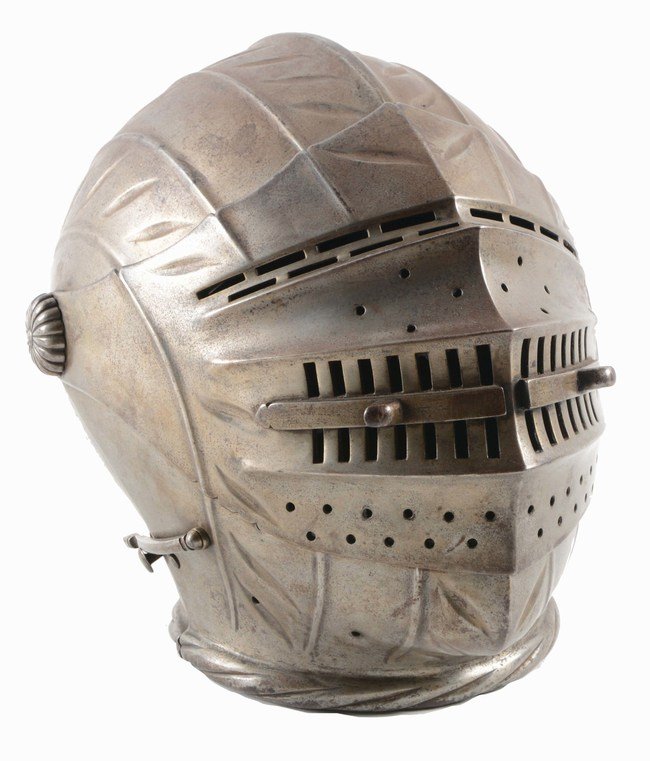 Wars have woven a continual thread throughout recorded history, and as nations have risen or fallen in defeat, their historical artifacts have been lost or severely depleted. A preferred source for collectors of superior-quality antique objects of war is Morphy Auctions, whose next Edged Weapons, Armor & Militaria sale is slated for December 10.

Fine swords and sabers with distinguished provenance will be in plentiful supply. An extremely rare U.S. Model 1840 officer’s sword was originally issued to a member of the small, elite Corps of Engineers, which drew top graduates from West Point. They played a key role in the country’s security, the construction of forts and public projects. “There were only 39 engineer officers at the time of this sword’s production, so it was a scarce item from day one,” said Dan Morphy, founder and president of Morphy Auctions. Its 31¾-inch blade is etched N.P. Ames/Cutler/Springfield and U.S. Corps of Engineers, along with trophy arms and a US flag. Estimate: $15,000–$20,000.

Similar in objective but a separate organization from the Engineers Corps, the respected Topographical Engineers claimed among their alumni Civil War generals Robert E. Lee and George B. McClellan. An Ames Topographical Civil War saber, whose pattern was a modification of the 1833 Dragoon Officer’s saber, is etched on its blade with the Topographical Engineers’ name, several American symbols, and acorn and oak-leaf scrolls. Estimate: $15,000–$25,000.

A beautiful production to its last detail, an extraordinary Philadelphia silver-hilt sword is lavishly adorned with a bird-head pommel with a stylized relief four-pointed star, C-scrolls and graduating bellflowers. The knuckle bow is deeply engraved with relief Rococo ornamentation, including military motifs and flags. The sword is depicted in the book American Silver-Hilted, Revolutionary and Early Federal Swords and estimated at $8,000–$15,000.

Ames’ U.S. Model 1840 cavalry officer’s saber is a type that was used in the Mexican War and early Indian Wars on the plains but also was preferred by some Civil War cavalry officers for its heavier blade and construction. Profusely etched with motifs, including the image of an American Indian with a raised tomahawk, an example of this versatile edged weapon is estimated at $10,000–$20,000.

Two very rare and important Confederate flags are expected to land in the top ten. An 1862 Army of Tennessee Confederate Battle Flag discovered some years ago in Bristol, Virginia, is one of possibly only seven survivors from the original 132 that were produced. Five are held in institutional collections; two remain in private hands, the auction example being one of them. Estimate: $40,000–$60,000.

The second banner of note is a Washington Light Artillery presentation Confederate battle flag whose provenance states that it was made by “the ladies of Augusta (Ga.).” Georgia post-Civil-War banners are extremely rare, and only a couple of survivors are known to exist. Significant and very well-provenanced, the flag carries a $30,000–$50,000 estimate.

Morphy’s December 10, 2019, Edged Weapons, Armor & Militaria Auction will start at 9 a.m. ET at the company’s gallery in Denver, Pennsylvania. All forms of bidding will be available, including live via the Internet. Online: www.morphyauctions.com.

#BREAKING:Two hairstylists who went to work with #covid19 symptoms at a #GreatClips salon in Missouri, are feared to have exposed as many as 140 clients. Yay @IngrahamAngle, "freedom"!!