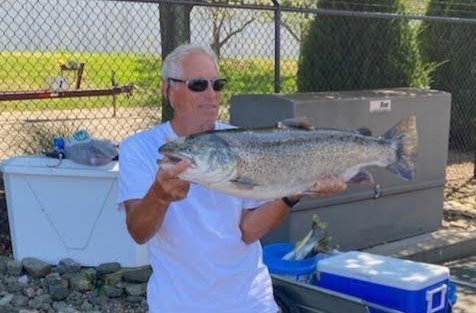 The Pennsylvania Fish and Boat Commission has certified a 20-pound 9-ounce Brown Trout, setting a new state record.  68 year old Robert Ferraro of Erie caught the monster on August 8.  The fish measured 33.75 inches in length with a girth of 21.125 inches.  This breaks the old record set in 2000 by 11 ounces.

Ferraro and his friends were targeting steelhead as they began trolling in 74 feet of water in the area known as the Condos in Lake Erie.

“We had been fishing in the same area the day before and caught some steelhead and walleye,” said Ferraro.  “The water temperature at the bottom of the lake had become warmer overnight and we were not having as much luck.  We were just about to go looking for cooler water when our luck changed.”

Ferraro said his group was trolling when they got a “big hit”.  The fish immediately began to run, taking 50 feet of line with it, and swirled to the surface of the lake but never jumped out of the water.  Ferraro says after a stressful 10-minute fight, his friends were able to net the massive fish.

“It was a huge thrill to catch such a big fish, but we didn’t know exactly what it was at first. We suspected it was a Brown Trout,” recalls Ferraro. “We know they’re in here, but the biggest ones I’ve caught before were around 12 pounds, and this fish was over 20 pounds.  It had a very dark back and some silver coloring on the body that made us question what it was for a minute.  We knew if it was a Brown Trout, it had a great chance to be a record.”

Upon returning to Walnut Creek Marina, the fish was positively identified as a Brown Trout by PFBC Fisheries Biologist Mark Haffley.

“Older fish like this that have been out in the lake for many years can appear different, but upon examination, it had all the markings of a brown trout including a box-shaped tail, spot pattern, and white pigmentation inside its mouth,” said Haffley.  “Its exciting to see a fish like this, a large female, which we estimate to be at least 6 or 7 years old.”

In the presence of PFBC Waterways Conservation Officer Tyler Soety and Deputy WCO Brad Donor, the Brown Trout was weighed on a certified scale, where it was officially recorded at 20 pounds, 9 ounces, exceeding the previous record set in 2000, also by an angler from Erie, by 11 ounces.

As is required for state record consideration, in addition to a witnessed weigh-in and PFBC in-person inspection, Ferraro completed an official state record fish application including color photographs, which was reviewed by PFBC officials and confirmed.  State record fish are judged only by weight and must exceed the previous state record by at least two ounces.

Ferraro, a lifelong angler, says he is honored to hold the new state record, which he believes could be broken at any time.

“There are absolutely more fish like this out there,” added Ferraro.  “I really hope it gives other people some motivation to get out and catch them.  I think it really underscores how healthy our fishery is right now in Lake Erie.”