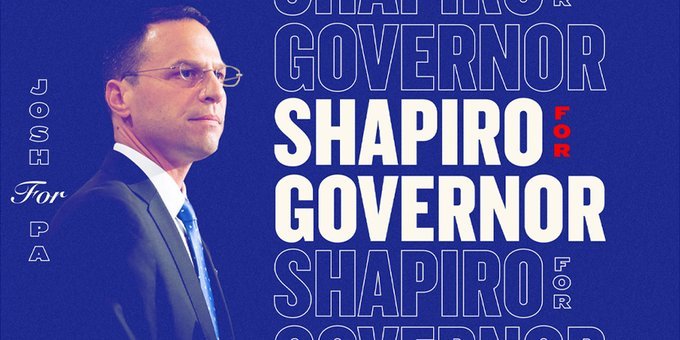 Pennsylvania Attorney General Josh Shapiro took to twitter this morning to announce he’s running for the Democratic nomination for Pennsylvania Governor in 2022.

“I’m running to be Pennsylvania’s next Governor. The stakes are too high to sit on the sidelines. It’s time we all get in the game and fight for our rights, our democracy, our Commonwealth.  This will be one of the closest races in the country — and I need you on my team.”

Shapiro also asked supporters for donations in a separate tweet:

“This is going to be one of the most expensive races in the country. If we’re going to keep Pennsylvania blue, we have to raise the resources to talk to voters all across the Commonwealth. Can you chip in $5 right now and join our campaign?”

The 48-year-old father of 4 is a self-described progressive who led a nationally prominent investigation into sexual abuse of children by clergy and further raised his political profile by pushing back against Donald Trump’s effort to overturn his presidential election loss last year.

He served as a state representative and chair of the Montgomery County commissioners board before winning election as the state’s top prosecutor in 2016 with no law enforcement background and little practical courtroom experience.

If he gets the Democratic nomination, it’s far from clear whom Shapiro would face in the fall 2022 election. The large and growing pool of potential and declared GOP candidates seeking their party’s nod includes state senators, business leaders, a former congressman and others.

Shapiro has benefited from a close relationship with Gov. Tom Wolf, a fellow Democrat who is constitutionally barred from seeking a third term. Shapiro has Wolf’s endorsement and, so far, the Democratic field to himself. He’s shown himself to be a formidable fundraiser in two successful statewide runs for office, with $2.7 million in his campaign account at the beginning of 2021.