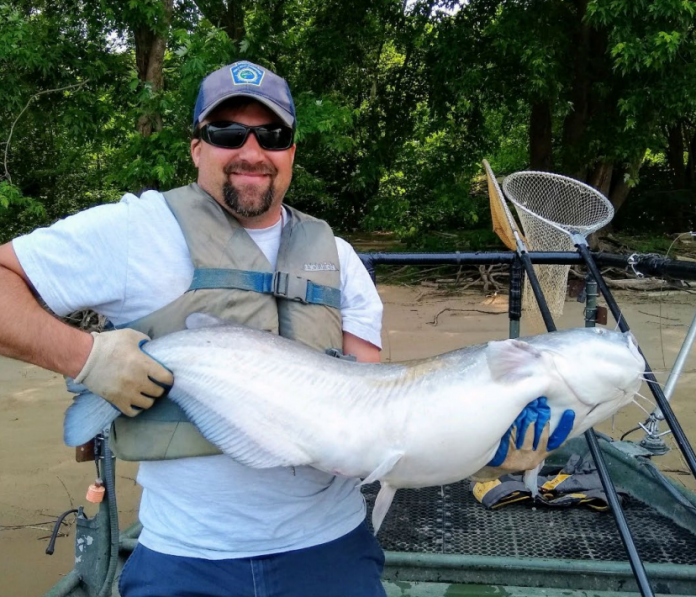 The Pennsylvania Fish and Boat Commission (PFBC) announced today that efforts to restore Blue Catfish (Ictalurus furcatus) to the Ohio River basin in western Pennsylvania will begin this week.  These efforts will include multiple years of stocking juvenile Blue Catfish into the Allegheny, Ohio, and Monongahela rivers, which are collectively known as the Three Rivers.

As North America’s largest catfish species, Blue Catfish are extremely popular with catfish anglers.  With the ability to reach weights over 100 pounds and a habit of feeding during cooler months, Blue Catfish have the potential to provide year-round trophy catfish angling in the Ohio River and its major tributaries in western Pennsylvania.

Re-introduction efforts by the West Virginia Department of Natural Resources have led to the re-establishment of Blue Catfish populations in portions of the Ohio River bordering Ohio and West Virginia, providing popular recreational fisheries.  Recent angler catches of Blue Catfish in the Pennsylvania portion of the Ohio River are likely the result of migration of fish stocked by West Virginia and provide evidence that the species would be able to be successfully restored in Pennsylvania waters.

The goal of the Three Rivers Blue Catfish Restoration Plan is to ultimately establish a self-sustaining, naturally reproducing population of Blue Catfish in the Ohio River, Monongahela River, and lower Allegheny River.

It is important to note that this plan pertains specifically to the PFBC-led restoration of Blue Catfish in the Three Rivers only.  Blue Catfish are a large, riverine species not considered native to the numerous lakes in the Ohio River basin.  As such, stocking will not be considered for these waterbodies.  Additionally, Blue Catfish are not native to the Atlantic Slope basins in Pennsylvania including the Delaware River, Potomac River, Susquehanna River, and Lake Erie, and are considered highly invasive outside of their native range.  Adverse impacts have affected fisheries where non-native Blue Catfish have been introduced including predation on threatened or endangered native species and commercially or recreationally valuable species.  It is illegal for individuals to stock Blue Catfish into any water of Commonwealth.  This species is not included on the PFBC’s Species by Watershed Approved for Open System (Flow Through) Propagation and Introductions list.  Additionally, 58 Pa. Code § 73.1 (relating to transportation of live fish) prohibits the transfer of fish from waters in this Commonwealth into another drainage where the species being transferred is not always present.