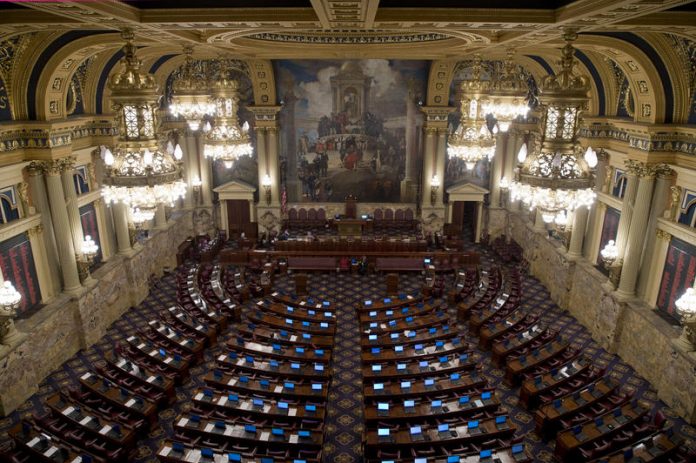 (WESA) A bill that would end elections for Pennsylvania’s three statewide courts is making its way through the state House. HB 111 would establish a “merit selection” process, where a bipartisan commission would choose judges and justices to serve on the state Supreme, Superior and Commonwealth courts.

The commission’s 13 members would be appointed by the governor and Democratic and Republican leaders in both chambers of the General Assembly.

The bill’s supporters argue that merit selection would promote an independent judiciary by limiting the influence of electoral politics and campaign money on judicial decisionmaking.

The idea has gotten little traction in the past, but state Rep. Russ Diamond (R – Lebanon County) said it’s gained momentum since the state Supreme Court drew up a new congressional map in February. The new map is expected to weaken the GOP’s advantage in winning U.S. House seats.

“Quite frankly, it’s caught a lot of attention and a lot more support this year, ever since the Supreme Court ruled the way it did on the redistricting case,” Diamond said. “I think a lot of people started thinking about the courts a little bit more in-depth.”

The nonprofit Pennsylvanians for Modern Courts has been a leading advocate for merit selection. The organization contends that, because members of the judicial selection commission would be appointed by elected officials, voters would still influence the process.

Voters would also have the opportunity to provide input on judicial nominees before they’re confirmed, according to Pennsylvanians for Modern Courts.

Despite his misgivings, Diamond says HB 111 could be an opportunity to reduce Pittsburgh and Philadelphia’s dominance on the courts – half of the 30 judges currently sitting on Pennsylvania’s three statewide courts hail from Allegheny and Philadelphia counties.

Last month, Diamond introduced an amendment to HB 111 that would have split the state into judicial districts of equal population, each of which would be assigned its own judge or justice for each statewide court. For example, there would be seven judicial districts for the seven-member state Supreme Court, with each district getting its own justice.

“We need to have fair regional representation for our courts, just like we have for our state Senate and our state House of Representatives,” Diamond said.

Diamond’s proposal didn’t pass in a floor vote last month. Rather, HB 111 now calls for three judicial districts, among which the judges and justices would be evenly distributed (with one justice serving the state at-large).

State Sen. Ryan Aument (R – Lancaster County), meanwhile, has introduced a bill that revives Diamond’s idea to create a separate district for each seat on each statewide court. SB 1144 would keep judicial elections, rather than switch to merit selection.

The House and Senate bills would both require amending the state constitution, meaning they would have to pass in two consecutive sessions of the legislature before getting final approval from voters.