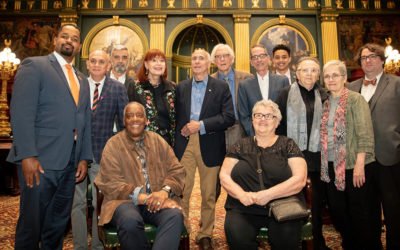 For the third year in a row, Senator Street (D-Philadelphia) attempted to offer a Unanimous Consent Resolution on the floor of the Senate recognizing June as LGBT Pride Month, and for the third year in a row, it was rejected by Senate leadership. This year was particularly important, as it also celebrated the 50th Anniversary of the Stonewall Uprising, who many in the LGBTQ+ Community recognize as the start of the modern LGBTQ+ civil rights movement.

“I was pleased to be joined by pioneers of the LGBTQ+ community on Wednesday to offer a Resolution, honoring and commemorating pride festivities in Philadelphia and across the commonwealth,” said Senator Street. “Unfortunately, Republican leadership did not see fit to allow it to proceed. However, I’m optimistic and hopeful attitudes around the commonwealth and Capital are improving, due, in no small part, to the work of our pioneers which will not be in vain. Both the LGBTQ community and allies like myself are undeterred and will continue to build upon their great legacy.”

On June 28th of 1969, the New York City police department conducted a routine raid of the Stonewall Inn bar of Greenwich Village, known throughout the community for being LGBT-friendly. As police began the forcible entry and actively harassing employees and customers, a crowd gathered outside of the bar to stand against the oppressive treatment. What commenced was a protest that lasted several days, which became the catalyst for significant mobilization to create what would become the foundation of a community that had not existed until that point – the LGBT+ Community

Senator Street invited several LGBTQ+ pioneers and activists as guests who expressed shame that the Senate was unwilling to pass a simple resolution recognizing their lives and struggles. Those distinguished guests included:

Elizabeth Coffey- Williams, a proud trans woman who underwent gender confirmation surgery in 1972, is an accomplished artist and activist who held positions such as board member for the Rockland AIDS Care Network and co-founded and facilitated the Chrysalis Gender Group.

John James, founder of the AIDS Treatment News, and a participant of the first Annual Reminder protest in front of Independence Hall in Philadelphia on July 4th, 1965, which was organized by the East Coast Homophile Organization (ECHO) to remind people that a significant number of Americans were still denied their rights to “life, liberty, and the pursuit of happiness.”

Susan Silverman, a former activist in the Gay Liberation Front (GLF), who helped facilitate the creation of the group known as Radical Lesbians.

David Acosta, appointed by Mayor Goode Sr., appointed to the Commission of Sexual Minorities as the first Latinx man from 1985 to 1989 the first African American mayor of Philadelphia, was. He is the founder of GALAEI, a queer Latinx social justice organization, as well as a member of other esteemed organizations and collectives that merge the fields of activism, art, and empowerment.

Senator Street remains committed to introducing this resolution until it is recognized by all members of the Senate in a unanimous vote to enact it.