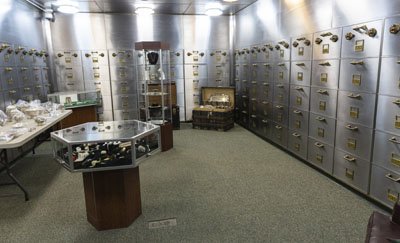 Treasurer Stacy Garrity announced the auction of nearly 4,000 pieces of unclaimed property in October brought in more than $200,000. The online auction took place over two days.

“Our first priority is always to return unclaimed property to its rightful owner,” Garrity said. “However, sometimes it’s necessary to auction items due to space restrictions in our vault. The cash proceeds from this auction have been cataloged, and the funds will be held in perpetuity until the owner is found.”

State law requires businesses to report unclaimed property to Treasury after three years of dormancy if it belongs to a known owner. If the owner is unknown, businesses are required to report it to Treasury after one year of dormancy. Treasury keeps tangible unclaimed property for about three years before it is auctioned. The only items never auctioned are military decorations and memorabilia, which will remain in Treasury’s care until a veteran or their family are found.

“Most of the tangible property that comes to Treasury is from abandoned or forgotten safe deposit boxes,” Garrity said. “These items, no matter their dollar value, were important to the individual who tucked them away for safekeeping, so it’s important to remind everyone to maintain regular contact with your financial institutions and to let a trusted adviser know where you keep your records. Taking these steps can prevent your property from being designated as ‘unclaimed’ and sent to Treasury.”

The items were auctioned for a total of $204,670. Pook & Pook will receive a 12 percent commission for their services, meaning Treasury expects to net $179,670 after all payments are received. To date, Treasury has netted $172,040. Items not sold at the auction, or for which the winning bidder do not pay, will be returned to Treasury’s vault.