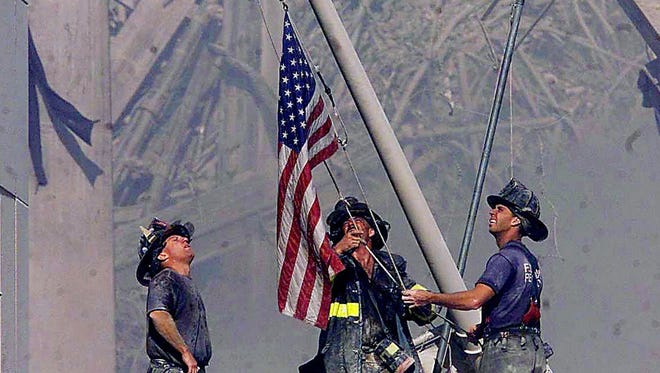 The program will begin with posting of the colors by Echo Company, 2nd BAT, 25th Marines from Harrisburg followed by a dramatic fly over of a UH-1 Helicopter (HUEY) by the Liberty War Bird Association. The Hampden Township Volunteer Fire Department will conduct a moving bell ceremony Striking the Four Fives to remember all first responders on 9/11.

The keynote speaker is Colonel (Retired) Frank Hancock. During Desert Storm, Col. Hancock was the youngest battalion commander in the 101st Airborne Division and later led the 1st BAT, 327th Infantry Regiment into Iraq as part of the Iraqi Freedom Campaign. A graduate of the Army War College, Hancock completed his 30 years of service as chair of the Department of Military Plans, Strategy, and Operations from 1998-2002.

A Day of Remembrance: “The lesson of 9/11 is that America is truly exceptional. We withstood the worst attack of our history, intended by our enemies to destroy us. Instead, it drew us closer and made us more united. Our love for freedom and one another has given us a strength that surprised even ourselves.” — Rudy Giuliani. Exactly one year to the day after 9/11, President Bush announced the first Patriot Day.