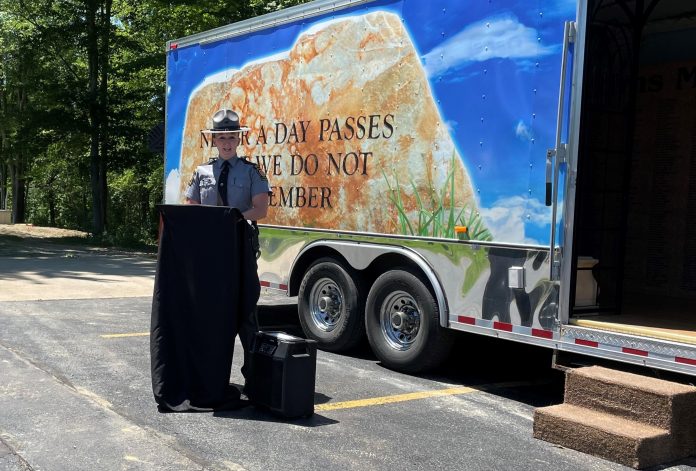 ​The Pennsylvania Department of Transportation (PennDOT) and its safety partners are urging motorists to avoid driving under the influence of drugs or alcohol through the Fourth of July holiday, and always.

Representatives from PennDOT, the Pennsylvania State Police (PSP), the Pennsylvania DUI Association, the Pennsylvania Traffic Injury Prevention Project (TIPP), and municipal police departments gathered today for an event at the Millcreek Community Church to bring awareness to the upcoming Independence Day Impaired Driving Campaign, which runs from June 20 through July 4.

The Pennsylvania DUI Association’s DUI Victims’ Moving Memorial was on display to honor Pennsylvanians who have been killed in crashes involving impaired driving.

“Each of the names on the memorial serves as an important reminder of the severe consequences associated with driving impaired,” said Craig Amos, Regional Program Administrator with the Pennsylvania DUI Association. “This is why it is so crucial for us to work with PennDOT and our law enforcement partners to continue educating motorists of the dangers it presents.”

During the enforcement wave, law enforcement agencies across the state will be actively participating in activities geared at deterring impaired drivers from getting behind the wheel.
There were 3,286 crashes statewide during the 2021 Independence Day holiday from June 25 to July 5, 2021, resulting in 41 fatalities, according to PennDOT data. Of those crashes, 306 were alcohol related, causing 17 fatalities. There were also 124 drug-related crashes that resulted in nine fatalities.

Throughout all of 2021, there were 450 people killed on Pennsylvania roadways as a result of impaired driving crashes.

“Partnerships play a key role in safety, especially during the holidays. PennDOT asks motorists and residents to partner with us to decrease the number of crashes caused by driving under the influence of drugs or alcohol by understanding the effects these substances have on the body and making a plan to get home before you start drinking,” said Saxon Daugherty, Safety Press Officer in PennDOT’s northwest region.

Even a small amount of drugs or alcohol can adversely affect someone’s ability to drive by hindering coordination, judgment, and reaction times. Some prescription and over-the-counter medicines can cause extreme drowsiness, dizziness, and other side effects.

Some effects of drug and alcohol use on driving include: