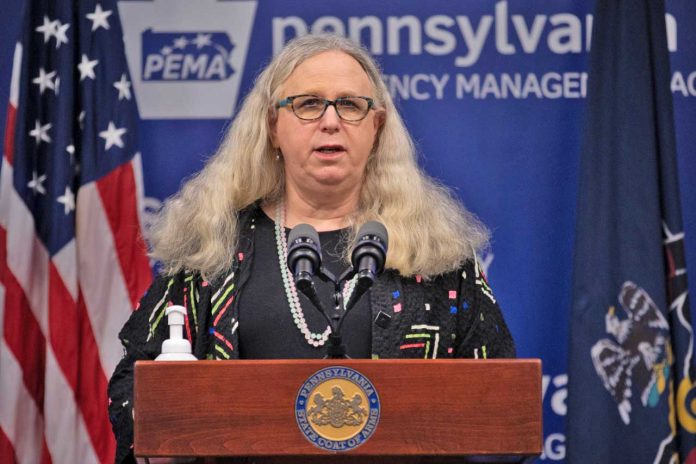 For the first time, Pennsylvania Health Secretary Dr. Rachel Levine responded to the “multiple incidents of LGBTQ harassment, and specifically transphobia directed at me, that have been reported in the press.”

Before she began her press conference on Covid-19, she made this statement:

“I would first like to sincerely thank Governor Wolf for his continued support and for his comments last week. The LGBTQ community has made so much progress under Governor Wolf and his leadership during his time in office, but I want to emphasize that while these individuals may think that they are only expressing their displeasure with me, they are, in fact, hurting the thousands of LGBTQ Pennsylvanians who suffered directly from these current demonstrations of harassment.

Your actions perpetuate the spirit of intolerance and discrimination against LGBTQ individuals, and specifically transgender individuals.

It is only one month ago that the Supreme Court prohibited discrimination in the workplace due to sexual orientation and gender identity, but LGBTQ individuals can still be denied housing, and public accommodations in most places in Pennsylvania, that do not have local nondiscrimination ordinances.

In addition, the most vulnerable among us continue to suffer, including LGBTQ individuals of color, LGBTQ youth, LGBTQ seniors, and LGBTQ immigrants. Transgender women of color continue to not only be harassed, but are more likely to suffer, violence, and even murder.

As for me, I have no room in my heart for hatred, and frankly, I do not have time for intolerance.  My heart is full with a burning desire to help people, and my time is full with working towards protecting the public health of everyone in Pennsylvania from the impact of the global pandemic due to COVID-19, and I will stay laser focused on that goal.”

This year my birthday wish is a call for kindness. We can’t just hope for a brighter day, we have to work for a brighter day. Love too often gets buried in a world of hurt and fear. So today, January 19th, let’s get to unearthing love ❤️ https://dolly.lnk.to/75thBirthday

My abiding hope—my abiding prayer—is that we emerge from this ordeal with a new wisdom.

And to open our hearts just a little more to one another.

#WeAreDC & while you can’t come here tomorrow for #Inauguration, you can:

plan your next visit for #4thofJuly or #LaborDay https://washington.org

send us a love letter to DC https://www.lovelettertodc.com

DC residents get visits from FBI as agents track cell phones that pinged... https://youtu.be/SuZ3ze8vOFk via @YouTube