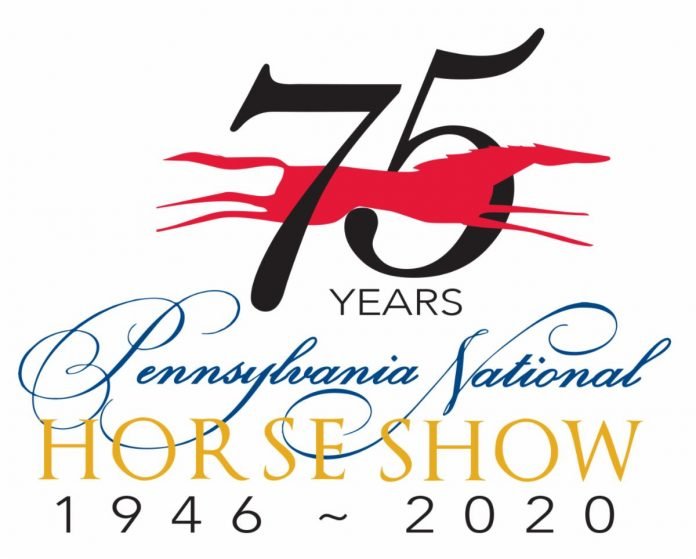 Exciting plans are underway for the 75th year of one of the largest and oldest horse shows in the United States, the Pennsylvania National Horse Show, held in Harrisburg, Pa. Featuring Olympians and the nation’s top riders and horses, this premier show will celebrate 75th years October 8 – 17, 2020 at the Pennsylvania Farm Show Complex.

In 1946, the first Pennsylvania National Horse Show (PNHS) was held at the Pennsylvania Farm Show Complex. Initially a four-day competition with 226 horses entered, the PNHS has evolved into one of the most prestigious shows in the nation, hosting more than 1,400 world-class competitors and thousands of spectators over the course of 10 days.

The 2020 schedule is packed with favorite highlights, including the Neue Schule/USEF National Junior Jumper Individual and Neue Schule/USEF Prix de States Team Championship, as well as the Dover Saddlery/USEF Hunter Seat Equitation Medal Final, which has launched the careers of some of the sport’s most elite riders.

With over $650,000 in prize money, the PNHS hosts some of the country’s best hunter, jumper and equitation riders for one of the nation’s largest indoor horse shows. The famed show also features five North American League (NAL) Finals, unique classes such as Ladies Sidesaddle and the traditional Hunt Night, and the grand finale with the biggest prize purse, the $134,000 Grand Prix de Penn National.

Special activities are being planned this year to commemorate the 75th, with many exciting family attractions both inside and outside the arena offering something for all ages. The PNHS has been named a USEF “Heritage Competition”, a designation reserved for long established competitions making a substantial contribution toward the development and promotion of the sport.  The Show’s impact on the community has earned the title as a “Champion of Economic Impact in Sports Tourism” by Sports Destination Management.  This program defines a champion as “competitions, as cities, as venues, as partnering organizations and as local organizing committees who worked together to produce events that have made the industry a more vibrant, more exciting, more varied and more interesting place”. This ten–day event brings approximately $9.5 million to the Greater Harrisburg region’s economy annually.