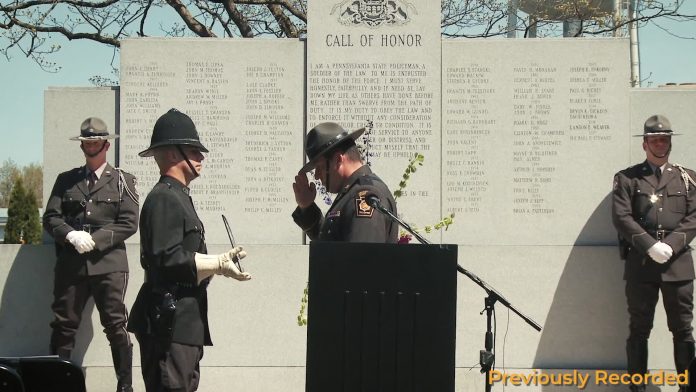 The Pennsylvania State Police paused to honor the department’s fallen troopers on its 116th anniversary. PSP was established by Governor Samuel Pennypacker on May 2, 1905, becoming the first uniformed police agency of its kind in the United States.

In 2021, the name of Trooper Donald C. Brackett was added to the Memorial Wall at the state police academy in Hershey.  He died after suffering a medical emergency while on duty on May 18, 2019. Trooper Brackett was previously engaged in department motorcycle training that was subsequently discovered to have exacerbated an unknown existing medical condition, ultimately leading to the fatal medical episode from which he died.

“The 99 names etched into the Memorial Wall represent not only the individual troopers who died in service to the commonwealth since 1905, but also the sacrifices of countless family members and loved ones who suffered their loss,” said Colonel Robert Evanchick, commissioner of the Pennsylvania State Police. “Today is a solemn day for our department, as we honor those who came before us and ensure that their contributions to our department are not forgotten.”

Governor Tom Wolf marked the occasion by proclaiming May 2 as Pennsylvania State Police Day in the commonwealth.

“Frances and I again extend our condolences to Trooper Brackett’s loved ones, as well as his larger state police family and everyone affected by his loss,” said Gov. Wolf. “Today serves as a reminder of the dangers faced by members of law enforcement, and I join all Pennsylvanians in pausing to remember the 99 troopers who have died in the line of duty.”

To comply with COVID-19 mitigation requirements, the PSP Academy shared a tribute video on its Facebook page* in lieu of an in-person ceremony. The video includes remarks from Colonel Evanchick and footage from previous ceremonies. An online version of the PSP Memorial Wall, with biographical information and photos of those who made the ultimate sacrifice, is available at psp.pa.gov.

Starting with an original compliment of just 228 men, the department has grown over the past 116 years to an authorized enlisted compliment of 4,719 and is supported by more than 1,700 civilian employees. It is the tenth-largest police agency in the United States.

Pennsylvania Pushing Program to Help Some Save $50 on Internet Bill

Voter Information Is Available at VotesPA.com

My Senate dem colleagues and I announced a plan to help PA recover from the pandemic. The New Deal for PA focuses on 3 topics: Jobs, Opportunity and Equity. It’s going to take time to get us back to “normal,” but this plan starts us on the right foot. https://go.shr.lc/33HzZN2

"The US economy misses out on $956 billion dollars per year, along with numerous nonmonetary benefits, as a result of postsecondary attainment gaps by economic status and race/ethnicity" The Cost of Economic and Racial Injustice in Postsecondary Education https://cew.georgetown.edu/cew-reports/publicbenefit/

One of the largest expenses included in next year’s budget will be the fees for students who choose to attend cyber school outside the district. Based on this year’s numbers, Neyman projects that cost could be as much as $644,000.
http://www.thecourierexpress.com/property-taxes-going-up-slightly-for-residents-of-the-brookville-area-school-district/article_fc8daafa-50e9-56cf-a98b-8632d678e84e.html

Wishing a joyous Eid al-Fitr to all those celebrating this evening! #EidAlFitr