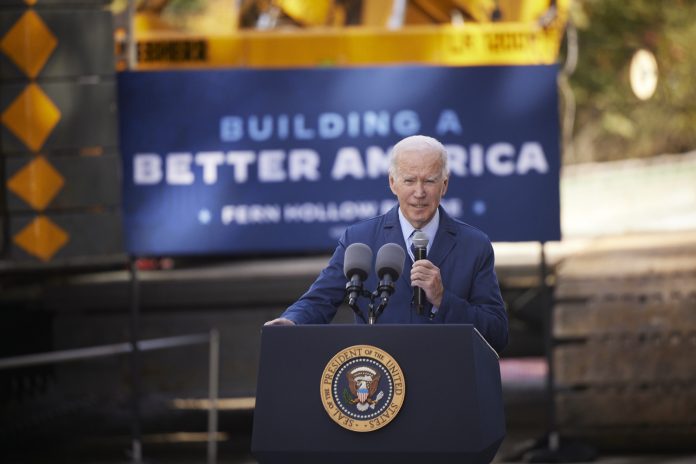 Governor Tom Wolf joined President Biden at the Fern Hollow Bridge in Pittsburgh to highlight the importance of investing in infrastructure and the impacts of the Bipartisan Infrastructure Law on Pennsylvania’s transportation network.

The Fern Hollow Bridge, which is owned by the City of Pittsburgh and carries Forbes Avenue over Frick Park, Fern Hollow Creek and Tranquil Trail, collapsed on the morning of January 28, 2022. The cause of the collapse is still under investigation by the National Transportation Safety Board (NTSB).

“The collapse of the Fern Hollow Bridge was a visceral reminder that Pennsylvania, like many states, is in a race against time to repair aging infrastructure,” said Gov. Wolf. “This problem isn’t unique to our state, but we need solutions urgently – because our communities deserve to know that they can rely on the safety of the bridges, roads and other infrastructure they use every single day.”

Substructure and superstructure work have been completed on the new bridge, and concrete deck placement work is expected to conclude by late October. Bridge barrier installation, the completion of abutment and wingwalls, and roadway tie-ins to the bridge are anticipated to be finished by late December to allow the bridge to open to a single-lane of bi-directional traffic while work continues into early 2023.

The Bipartisan Infrastructure Law (BIL), signed by President Biden in November 2021, allowed PennDOT to quickly dedicate $25.3 million in federal funds to the project without impacting other critical regional needs.

“Without the new BIL funds, we would have been scrambling to find the money to quickly replace the Fern Hollow Bridge, and other important projects would have been impacted,” said Gov. Wolf. “There’s no question that these new funds have been a gamechanger for Pennsylvania, not only for this project, but across the commonwealth.