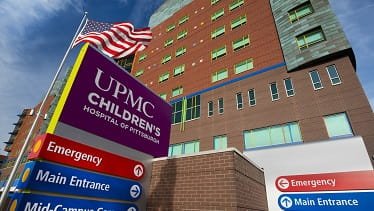 The Best Children’s Hospitals rankings feature the top pediatric hospitals, out of 250 nationally, who are ranked in each of 10 specialties: cancer, cardiology and heart surgery, diabetes and endocrinology, gastroenterology, neonatology, nephrology, neurology and neurosurgery, orthopaedics, pulmonology, and urology. Hospitals that ranked high in three or more specialties made the honor roll.

“It is an honor to be ranked again as one of the best pediatric hospitals in the country. National recognition like this exemplifies the breadth of excellent and compassionate care UPMC Children’s provides for patients of all ages,” said Mark Sevco, president, UPMC Children’s.

“We are extremely proud of UPMC Children’s, but our work does not stop in Pittsburgh,” explained Leslie Davis, senior vice president, UPMC, and executive vice president and chief operating officer, UPMC Health Services Division. “UPMC is committed to expanding UPMC Children’s nationally ranked care across all the regions we serve, so that every child gets the right care at the right time by the right provider regardless of where they live.”

UPMC Children’s is expanding its pediatric specialties and subspecialities throughout the region, including:

Did you know: Megan Sullivan is a veteran litigator with twenty years of legal experience as a criminal prosecutor and civil attorney?

Institute For The American Worker@Inst4AW·
2h

Our economy will be stronger when more women are included in the workforce and have the tools to achieve their version of the American dream.
Opinion via @EricaJedynak
https://savejersey.com/2021/07/building-a-stronger-more-inclusive-economy-for-women-jedynak #PROact