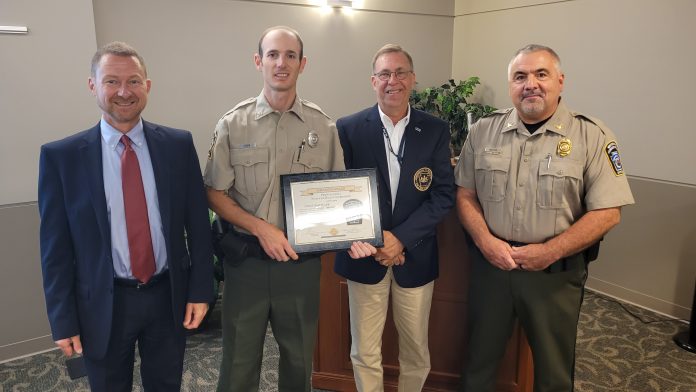 On December 26, 2021, while off duty, WCO Stark was in the parking lot of the Lowe’s in Rostraver Township, Westmoreland County, when he heard someone screaming for help.  Stark located a young woman who indicated that her three-month-old daughter was not breathing and was turning purple in the face.  Stark recognized that the infant had an obstruction that was preventing the child from breathing.  Without hesitation, Stark utilized his lifesaving training to deliver several back blows to the infant, which successfully cleared the obstruction and allowed the child to breathe.

Stark remained with the mother and child until local emergency medical responders arrived at the location.

“There is no doubt in my mind that WCO Stark’s quick thinking and decisive action in those stressful moments saved the life of that little girl,” said Col. Clyde Warner, Director of the PFBC’s Bureau of Law Enforcement.  “We could not be prouder of Jonathan for going above and beyond the call of duty that day, trusting his instincts, and preventing disaster for the family of that child.”

Stark was presented with a plaque recognizing his lifesaving actions during the PFBC’s quarterly business meeting in Harrisburg on July 26.