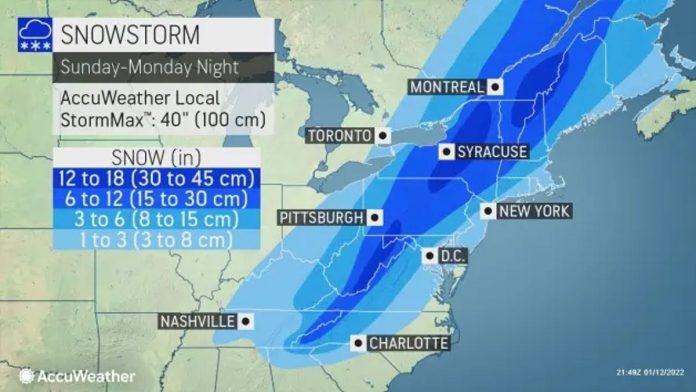 AccuWeather forecasters warn that a snowstorm could wreak havoc on a large corridor of the eastern United States over the Martin Luther King Jr. holiday weekend. It will pack hefty snow amounts, significant icing, heavy rain and gusty winds all throughout the Eastern Seaboard and across inland areas.

Winter storm watches were issued in many locations early Friday morning in advance of the snow. Roanoke, Virginia; Charleston, West Virginia; Pittsburgh; and Binghamton and Syracuse, New York are just a few locations where the watches were hoisted before daybreak on Friday. In Roanoke and Charleston, snow may mix with or change to ice for a time during the height of the storm.

An intrusion of cold air behind a potent storm pummeling Atlantic Canada late this week will lead to the winter weather mayhem as a storm dives southward across the Midwest before tracking across the Southeast and making a sharp turn north-northeastward along or just inland of the Atlantic Seaboard.

“It looks like a very strong storm system will unleash very significant snow across the interior parts of the Northeast, especially from the Appalachians up into the high ground of New York state and into northern New England,” AccuWeather Chief Meteorologist Jon Porter said. “In some locations, the snow can be measured in feet.”

Even though the major winter storm is still a few days away from swinging into the Northeast, confidence is growing among AccuWeather meteorologists as to where the air will be cold enough to support an all-snow event versus one that features a wintry mix and all or mostly rain. As of Thursday, a track just inland or right along the Atlantic coast in the Northeast seems most likely.

In either case, and even though the storm’s strength is not expected to reach the magnitude of the Blizzard of ’93, the storm from Sunday to Monday has the potential to pack a punch with a period of heavy snow on its cold northwestern flank and heavy rain or heavy snow changing to rain on its warmer southeastern side.

“Enough cold air is likely to be in place for an all or mostly snow event from near and west of Interstate 81 corridor in the Northeast states, while near and south and east of I-95, rain is likely to be the primary form of precipitation,” AccuWeather Senior Meteorologist Bill Deger said, adding that in between snow, ice and rain may fall.

In portions of the central Appalachians during the height of the storm and at the onset of the storm close to the Atlantic coast, snow may fall at a furious pace of 1-3 inches per hour. A snowfall rate of this intensity can quickly bury roads and overwhelm road crews, especially along roadways that experience a heavy volume of traffic.

Snow is likely to fall throughout the duration of the storm in parts of the Appalachians, and a foot or more of snow could pile up with an AccuWeather Local StormMax™ of 40 inches. Conditions will deteriorate quickly in the all-snow zone as increasing winds will lead to significant blowing and drifting of snow.

Even in some areas where mostly rain is forecast to fall along I-95 in the mid-Atlantic and part of New England, a few inches of snow can still pile up quickly beforehand. The speed of the change to rain or even a wintry mix, including ice, will determine precise snow accumulations. Several hours of a wintry mix will be likely in the suburbs of the major I-95 cities.

“Whenever we’re dealing with a big snow and ice storm, there’s going to be significant travel problems on the roads and also at the airports,” Porter said.

However, AccuWeather forecasters noted that a shift in the storm’s track by as little as 50 miles will affect the outcome.

“Should the storm manage to drift 50 miles or so off the coast while heading northward, I-95 cities from Washington, D.C., to Philadelphia, New York City and Boston could be buried in snow with little or no rain and ice mixing in,” Deger said. In that case, a true nor’easter would unfold, and even blizzard conditions might develop along the I-95 corridor.

If the storm takes a path much farther to the west of I-95, the heaviest snow will instead fall along the western slopes of the Appalachians to portions of the Ohio Valley and part of the Great Lakes region, although AccuWeather forecasters say this scenario appears to be less likely to unfold. Rain would spread from the I-95 corridor to areas well to the north and west. A wintry mix at the height of the storm could potentially cut down accumulations along the spine of the Appalachians in this scenario.

Ice and freezing rain could also be a significant issue from northern Georgia through Virginia as the winter storm lifts northward Saturday night through Sunday night. Travel could become treacherous on major highways across the region, including those around Charlotte and Raleigh, North Carolina; Greenville and Columbia, South Carolina; and Atlanta. Extended power outages are also possible.

As the storm moves north-northeastward along the Atlantic coast, other hazards are likely to unfold. Increasing winds from the strengthening system will lead to a period of coastal flooding and beach erosion.

On the southeastern edge of the storm, thunderstorms may become strong enough to bring the risk of severe weather. That could occur from Florida to the coastal Carolinas and perhaps Long Island, New York, and eastern New England.

The storm has the potential to strand travelers on the highways and at airports as people move about for the long weekend.

Major disruptions to travel, shipping, supply chain and COVID-19 testing are anticipated due to areas of rapid snow accumulation, icy conditions and even flooding rain, according to Porter.

“We’re already dealing with so many shortages of products at some supermarkets, that we’re going to be concerned about supermarkets being able to keep the products that consumers need across many parts of the affected areas,” Porter explained.