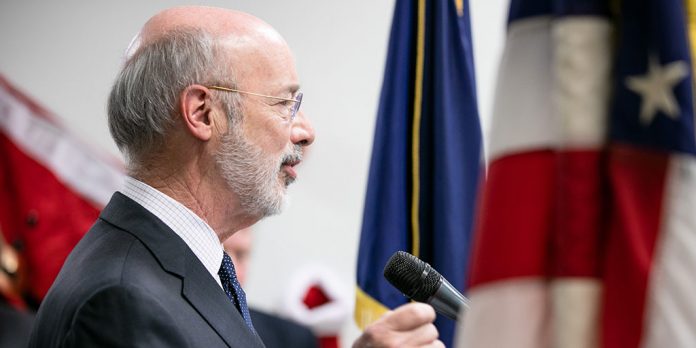 Nearly 14,000 state employees have been honored since Governor Tom Wolf signed an executive order in June creating the Pennsylvania State Employee Service Recognition Campaign to annually recognize and thank commonwealth employees who serve or have served in the Armed Forces of the United States, the Reserves, and National Guard. Those honored have received a lapel pin featuring our national flag and the commonwealth flag signifying their dual service status.

“This campaign is a fitting way to thank our dedicated state employees not only for their military service, but also for their continued service to the citizens of the commonwealth,” Gov. Wolf said. “It also allows us to help them better understand and access all of the state and federal benefits they may have earned through their service. I look forward to continuing this tradition of recognition in the coming years with all new eligible state employees because we owe each and every one of them our gratitude.”

A total of 35 state agencies have held numerous recognition events across the state to make sure each honoree received his or her pin. A few of the larger state agencies are winding down their events.

“This campaign is an outstanding way to honor the one percent of our commonwealth’s population that currently serve as state employees and also served in our nation’s military. These great American patriots continue to give back to our communities as committed public servants,” said Maj. Gen. Anthony Carrelli, Pennsylvania’s adjutant general and head of the Department of Military and Veterans Affairs, the agency managing the recognition campaign. “We also promoted this effort as another way to raise awareness about federal and state veteran benefits, to encourage registration in the Pennsylvania Veterans Registry, and to inform state employees about mentoring opportunities within our veterans’ communities.”

State employees who received their lapel pin have enjoyed the recognition and the comradery it brought about.

“As a veteran of the U.S. Armed Forces and an employee of the commonwealth, I am extremely proud to be recognized for my service to this great country as well as the citizens of Pennsylvania,” said Kenneth M. McClain, a PennDOT employee who served in the Army National Guard. “The State Employee Service Recognition Campaign brought together members from my PennDOT organization and highlighted the importance of public service. This program provided not only a ‘thank you,’ but also served as a reminder to veterans that the DMVA stands poised to provide benefits to those who served. Our recognition event afforded me the opportunity to share stories and build a network of co-workers who are really part of a special subset of state employees.”

Employees who serve or have served in the Armed Forces of the United States: Army, Marine Corps, Navy, Air Force, Coast Guard, as well as the Reserves and National Guard were eligible for program participation and recognition. Moving forward, the campaign will annually recognize all new eligible state employees with a pin.

At this age I never seen so many hard decisions I’ve been faced with!

Any other teachers feel like crying? I'll push through, but y'all, this isn't what I signed up for. My classes are going pretty good but the workload far exceeds my capacity (and I'm a high capacity person).