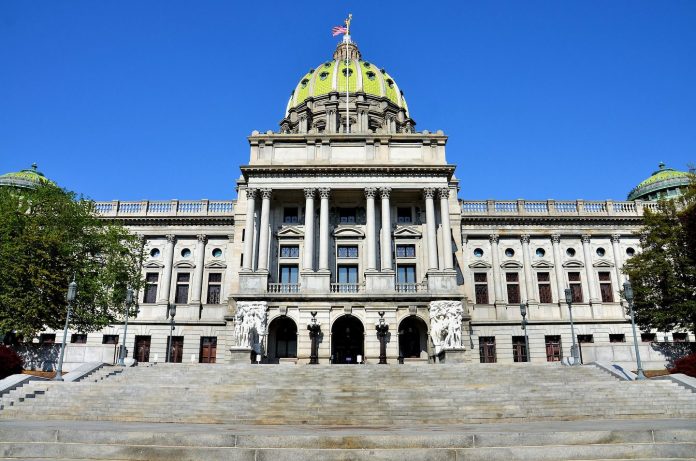 (Lowman Henry – Susquehanna Valley Center for Public Policy) On a crystal clear May morning across the Susquehanna River from a gleaming state Capitol building a podium adorned with the seal of the Senate of Pennsylvania stood in front of a barber shop.

State Senator Mike Regan kicked off a stout defense of the barber’s right to cut hair. He was followed by State Senator Doug Mastriano and a parade of legislators speaking on behalf of the barber as the gathered crowd shouted its support.  The rally ended with an emotional plea to earn a living by the barber himself, Brad Shepler, a military veteran.

What prompted such an outpouring of support?  Governor Tom Wolf who continues to rule Pennsylvania by unchecked executive fiat during the Coronavirus pandemic had decreed hair cutting cannot resume until he deems it safe.  Shepler defied the governor who then unleashed deep state storm troopers on him threatening to revoke his license and fine him $10,000 per day.

There will be months, if not years of legal wrangling over the governor’s authority to ban business activity.  But small business owners like Brad Shepler don’t have months or years for the courts to hopefully place some checks on presumed executive authority.

Closed for two weeks to “flatten the curve” and “not overwhelm the health care system” has turned into months of business closure orders by the governor and a state health department that can’t even provide consistent or accurate statistics on the pandemic. Businesses are going bankrupt and consumers have become fed up with the restrictions.

But Governor Wolf does not care.  Worse, having lost the “consent of the governed” he has resorted to heavy handed threats and has weaponized the deep state regulatory bureaucracy against the very taxpayers who pay their salaries.  He has threatened everyone from barbers to county commissioners in his zeal to keep Pennsylvania locked down as tight as possible for as long as possible.

More and more businesses are willing to take the risk of re-opening.  Whether they are forced out of business by bankruptcy or by the heavy hand of government fines and license revocations they are still out of business.  So why not at least try?

That is the path followed by the Round The Clock diner in York County which re-opened for sit down dining.  The Department of Agriculture, which licenses restaurants, threatened fines and license revocation.  Threats have also been made by the Liquor Control Board to revoke licenses of any business that fails to comply with the governor’s whims.

Wolf went so far as to personally threaten county commissioners who rebelled against his failure to begin easing restrictions in their counties.  He threatened to withhold millions in federal funding, passing through the state, from any county that defied him.  Most of the counties caved, but a couple – including Lebanon County – moved forward despite the governor’s threats.

And while thousands of protesters gathered on the Capitol steps to demand an end to his lock-down policies lawmakers passed a series of bills designed to open up various segments of the state’s economy.  Wolf responded in his typical imperial style disregarded the will of the people and vetoed the bills.

Making matters worse the metrics upon which the state moves from its juvenile red-to-yellow-to-green status are ill-defined and ever changing.  Wolf and his embattled health secretary Dr. Rachel Levine have shielded themselves from public scrutiny by holding “virtual” press conferences in which questions are screened by the governor’s staff.  A process most of the state’s news media has meekly accepted.

Given the current pace of re-opening it is clear Governor Wolf intends to keep Pennsylvania in some amount of lock down for many months to come.  More businesses will go bankrupt and drug overdoses, suicides, and domestic abuse cases already on the rise will skyrocket.

There is only one way to prevent this from happening: the legislature must use their power of the purse during the upcoming weeks of budget negotiations to bring Wolf to heel.  Yes, that likely will triggered a budget stalemate and lead to a partial government shutdown.  But no state government is better than one which subjugates its people.

Lowman S. Henry is Chairman & CEO of the Lincoln Institute and host of the weekly Lincoln Radio Journal.

The views expressed here are those of the author and not necessarily those of The Susquehanna Valley Center.

Nothing contained here should be considered as an attempt to aid or hinder the passage of any legislation.