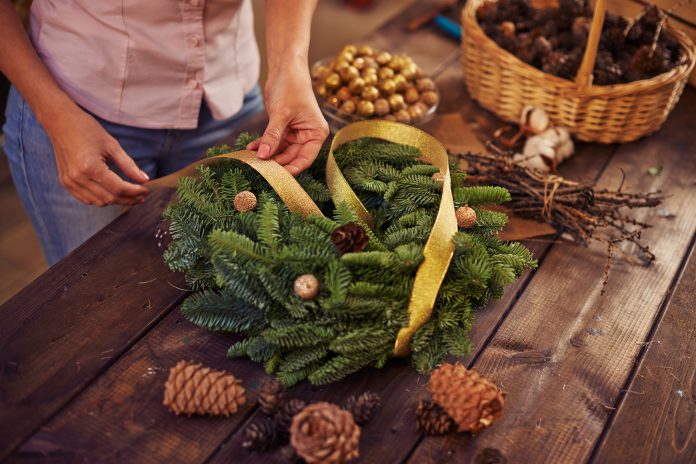 Wreaths Across America is calling on all Americans to join together on Tuesday, September 7, 2021, in waving the American flag in remembrance of the 20th Anniversary of September 11th. The event will be hosted LIVE on its official Facebook page and broadcast over Wreaths Across America Radio. It will include Gold Star Families, whose loved ones answered the call to serve after 9/11, Veterans, and First Responders and their families. Now more than ever, it is so important that we come together as Americans to show support for those whose service, courage, and sacrifice, help keep America free.

WAA gathers every Tuesday morning from 9-10 am ET to raise the American flag and say the Pledge of Allegiance from the Freeport Flag Ladies Monument in Jonesboro, Maine, near the ‘tip lands’ where the balsam is harvested to make veterans’ wreaths for placement on National Wreaths Across America Day each December. The monument, located on Route 1, was built by Wreaths Across America and Worcester Wreath Company in September 2019, after the Freeport Flag Ladies retired following 18 years of waving the American Flag in Freeport, Maine, each Tuesday since Sept. 11, 2001.

“Now, more than ever, it is so critical for communities to come together to Remember all those who served, and Honor their service and their family’s service, especially those who volunteered during the War on Terror following the events of September 11, 2001,” said WAA Executive Director, Karen Worcester. “But more than anything, we must Teach our children about these men and women, and the courage and commitment it takes to be a part of the small number of Americans who protect all our freedoms. Please join me on Sept. 7th, as we wave the flag across America, like we do each Tuesday morning, and never forget that Freedom isn’t free, and it must be protected.”

The flag-waving event will begin at 8:45 am ET and conclude at 10:05 am ET. In addition to the National Anthem, Pledge of Allegiance and sharing of stories, the event will include four moments of silence, as listed below.

At 8:46 am, on Tuesday, Sept. 11, 2001, five hijackers took control of American Airlines Flight 11 and flew it into the heart of New York City and the northern facade of the World Trade Center’s North Tower (1 WTC).

At 9:03 am, five other hijackers flew United Airlines Flight 175 into the southern facade of the South Tower (2 WTC).

At 9:37 am, another five hijackers flew American Airlines flight 77 into the western facade of the Pentagon in Arlington County, Virginia.

At 10:03 am, four hijackers crashed United Airlines Flight 93 into a field in Stonycreek Township near Shanksville, Pennsylvania.

Today, 4 tested positive from a restaurant that only allowed vaxxed customers.

This early assessment indicates that antiviral immunity wanes after the 3rd dose of COVID vaccine at a rate similar to that observed after the 2nd dose. More work of course is needed, but at this stage, it appears that a 3rd dose may still not provide durable immunity https://twitter.com/erlichya/status/1467887299753287680

"Still unknown virulence". I'm worried false hope that omicron is just the sniffles could turn into panic if it's not.